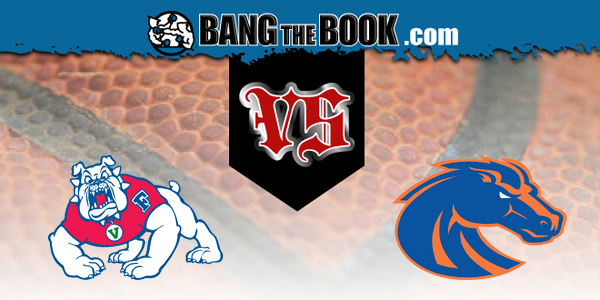 The Boise State Broncos lost their opener to the Houston Cougars in a very disappointing shooting performance. But since then, they’ve been on a bit of a roll, winning twelve games in a row. No, they have not been tested very seriously. And we don’t expect that stern test is going to come on Wednesday night, as they face off against the Fresno State Bulldogs in a game that gets underway at 11 p.m. Eastern time at the ExtraMile Arena in Boise.

Remember that at BetAnySports, you can get reduced juice for a better deal on the odds, and then, with Sports Betting Prime, you’ll have the opportunity to make real-time wagers while the contest is in progress.

Boise State was beaten 68 – 58 by eighth-ranked Houston in their first shot out of the box, and they missed 16 of their 17 shots from three-point range. It is fair to say that they have improved in that area, as at 35.5%, they are more than respectable.

Yes, they have faced lesser lights since then, for the most part, but one impressive outing for them was on December 9th, when they went into Provo and beat BYU 74 – 70, hitting six of their ten attempts from beyond the arc. Ten of their 12 victories in this current streak have come by double-digits.

Both of these teams do a pretty good job stamping out second-shot opportunities, as they each rank in the top 20 in defensive rebounding percentage. But when it comes to defense, you have to give the considerable edge to Boise State, which has yielded only 29.2% from downtown and also 45.9% from inside the three-point line.

Fresno State is flawed in many ways fundamentally – they make only 61% of their free throws, less than 30% of their triples, and they turn the ball over at a dizzying rate – 21% of their possessions, in fact. And let’s go over another metric as well; only 41% of FSU’s field goals have come by way of an assist. That is 332nd in the nation (according to the good people at KenPom), and that represents a lack of ball movement. Against the better defensive teams – and we would say that in the Mountain West, Boise State qualifies in that category – you simply have to get more passing in the half-court to achieve good shots.

Fresno State certainly has an asset in 7-footer Orlando Robinson, who has registered six double-doubles already. He’s had some breakout performances as well, including 33 points and 13 rebounds against Wyoming, followed directly by 23 points and 14 boards against San Jose State. So he is indeed a load to deal with.

But Boise State has pretty good overall size, and Mladen Armus, their 6 – 10 center, it’s one of the better offensive rebounders in the Mountain West. so we are relatively certain that they can compete in the lane.

Boise State will have some shooters like Marcus Shaver (44), Max Rice (43.5), and Derrick Alston (38.7%) to stretch things out in three-point territory, so we’ll see if Fresno State, which has allowed 37% triples, can handle that.

And the Bulldogs have had difficulty stepping up in class; they have lost by margins of 14 and 16 points against Nevada, and I’ve already suffered TWO 22-point defeats at the hands of Colorado State. So we’re thinking Boise State, a much more experienced side, can probably overcome this number.

BetAnySports will give you all the value that you need as you pursue your wagering on college hoops, including reduced juice for a special break on the odds, and great payoffs on your exotic bets….. They make it easy to open up an account as well, as you can use your debit card, credit card, person-to-person transfers or the virtual currency of Bitcoin, which is very easy to do with their automated system!