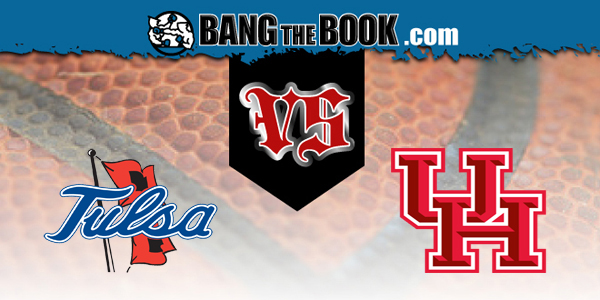 When the Tulsa Golden Hurricane defeated the Houston Cougars back on December 29th, that was a bitter pill for Kelvin Sampson’s team to swallow. But perhaps they learned some lessons that night, and they can take them into the rematch in this American Athletic Conference rivalry, which takes place Wednesday night at 8 p.m. Eastern time at the Fertitta Center in Houston.

Remember that at BetAnySports, customers have the opportunity for reduced juice, which offers better odds, and then after the game begins, there is Sports Betting Prime, which enables real-time wagering.

It went down to the final second in the first meeting, as Brandon Rachal, who wound up with 20 points on the evening, sank two free throws to give Tulsa the victory. Houston is still, at this moment, ranked eighth in the country, but they certainly can’t afford to be swept by another AAC team without dropping precipitously in the polls.

What Houston has going for it is a rather well-rounded squad, which defends with an awful lot of ferocity on the perimeter. In fact, they are seventh best in the country, surrendering only 25.6% from three-point range. That certainly is a factor that goes into their ranking, of course, in Adjusted Defensive Efficiency (according to the metrics at KenPom).

And when you talk about ferocity, they absolutely hit the offensive boards with aplomb, coming down with 40.6% of all available opportunities, which ranks third in the nation. The major catalyst here is Justin Gorham, who has averaged 4.8 offensive rebounds per game, with highs of nine against SMU and 11 against Alcorn State. Gorham, a transfer from Towson, would be Houston’s rough equivalent to Dennis Rodman, and he ranks ninth in the nation in Offensive Rating, partially because he hardly ever turns the ball over – only seven times, in fact, in the 334 minutes he’s played.

Houston can trot out some three-point shooters as well, including sophomore guard Marcus Sasser (37%) , who has picked up some of the offensive slack in the wake of the departure of Caleb Mills, pre-season conference Player of the Year, who left school and intends to transfer to Florida State. And Quentin Grimes is also starting to fulfill his potential. The 6 – 5 swingman started every game as a true freshman at Kansas, which is not an insignificant feat. But the general feeling is that he under-achieved there. Now he’s averaging over 17 points per game.

Tulsa is almost completely impotent from three-point range, hitting only 27.6%. And they are one of the worst teams when it comes to converting free throws as well (65.3). So they are going to have to pursue a game inside the arc, but we don’t see any real advantages for them there.

Of course, the pointspread offers quite a cushion, but we obviously have to consider a revenge angle, along with the fact that Tulsa has lost its last three trips to Houston by an average of 28 points per game. Kelvin Sampson, a controversial figure in coaching circles, but nonetheless someone who has won 20 or more games in sixteen separate seasons, preaches defense and gets it out of his charges. Watch the Cougars put forth the maximum effort here, as we lay the points.

BetAnySports customers get the best of everything, including reduced juice for better odds, and of course, Sports Betting Prime, which enables them to stay very much in the action with real-time wagering after the opening tip….. And they’ve got a lot of options for you to open up an account, including debit or credit card, person-to-person transfer or the virtual currency of Bitcoin, which is fast and easy with their automated system, and never incurs a transaction fee!