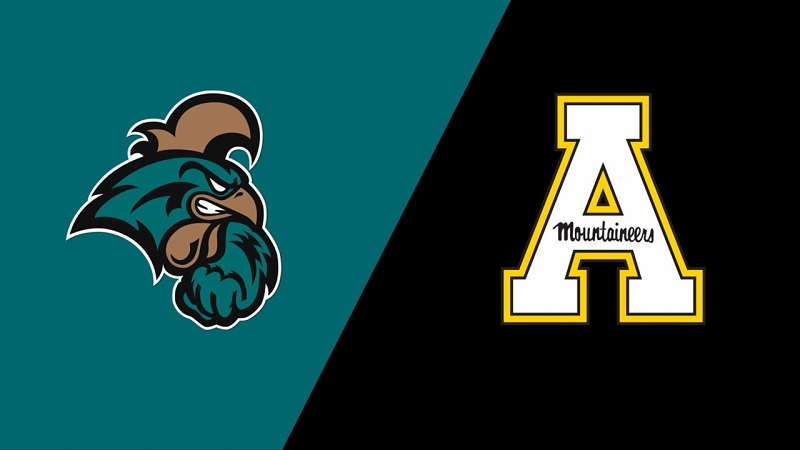 Week 8 of the 2021 college football season kicks off with the Sun Belt Conference showdown between the Chanticleers and Mountaineers, so we bring you the best Coastal Carolina vs. Appalachian State betting pick and odds for Wednesday, October 20.

The No. 14 Coastal Carolina Chanticleers head to Kidd Brewer Stadium in Boone, North Carolina, as slight 4-point road favorites. The Mountaineers are +170 moneyline dogs, while the totals are listed at 60.0 points on BetOnline Sportsbook.

The Coastal Carolina Chanticleers (6-0; 4-1-1 ATS) are coming off a bye, and they’ve posted three straight 50-burgers, destroying UMass 53-3, UL Monroe 59-6, and Arkansas State 52-20 over the previous three weeks. They’ve covered on all three occasions, so it’s not strange the Chanticleers rank 14th in the AP Top 25 Poll. Still, it’s fair to say that App State is a much better team than any of Coastal Carolina’s recent opponents.

The Chanticleers lead the nation in points scored per game (48.8). They are 18th in passing yards (290.7) and fourth in rushing yards per game (261.8). Junior RB Reese White leads the backfield with 455 rushing yards and seven touchdowns, while senior Shermani Jones and freshman Braydon Bennet have combined for eight rushing scores so far this season.

The Mountaineers suffered a heavy loss in Week 7

The Appalachian State Mountaineers fell to 4-2 straight up and 3-3 ATS on the season following a 41-13 defeat at the Louisiana-Lafayette Ragin’ Cajuns in Week 7. They were listed as 4.5-point road favorites, but the Mountaineers had a really bad day in the office, racking up only 211 total yards and committing four turnovers.

Senior QB Chase Brice threw a couple of picks and finished 15-of-26 for 133 yards. At least, he added seven totes for 11 yards and a TD. On the other side of the ball, the Mountaineers surrendered 246 rushing yards and 209 through the air to put an end to their three-game winning streak. Over the last few weeks, they’ve outlasted Elon 44-10, Marshall 31-30, and Georgia State 45-16.

The Chanticleers own the eighth-best scoring defense and the third-best run D in the country. Yes, they’ve played some bad teams so far this season, but their offense has been unstoppable due to a great depth and plenty of dangerous weapons at disposal.

Coastal Carolina can hurt its opponents both through the air and on the ground. The Mountaineers have shown some serious flaws in their defense last time out, so I’m backing the Chanticleers to win and cover a 4-point spread. Last year, Coastal Carolina beat App State 34-23 as a 3-point home fave.

If the hosts want to keep it close, they’ll have to put on a strong offensive performance. After laying the egg in Week 7, the Mountaineers should be much better in this one, especially on the offensive end, so give me the over on the totals despite a pretty high line.

The Mountaineers cannot turn the ball over four times and expect to win. On the other side, the Chanticleers’ defense will have the first proper task since a 28-25 victory at Buffalo on September 18. The over has hit in four of Coastal Carolina’s last five meetings with the Sun Belt Conference.