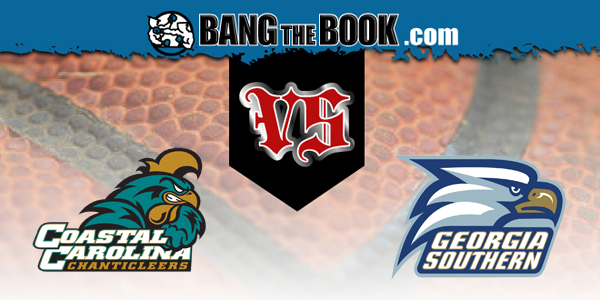 Sometimes that’s how it goes, unfortunately, but it’s been a good week and a good run otherwise, so we’ll get back in the saddle with a play that I’ve had my eye on since Monday. That is Game 845/846 between Coastal Carolina and Georgia Southern down in what we usually refer to as “The Fun Belt”.

For those that don’t know, BangTheBook Radio moved over to ATS.io to become ATS Radio. This game was highlighted on Monday’s show with our friend, Kyle Hunter. With the loss, we’ll change it up from Bovada to Bookmaker and look at Coastal Carolina -2 with a total of 141.5.

Money has been bet on Georgia Southern to this point to drive the line down from -3 to -2. Is that the right side in my mind? Let’s find out.

Coastal Carolina might be a football school in the minds of most these days, and even a baseball school to some, but the basketball team is also pretty good. Cliff Ellis has fielded an 11-3 squad with a 5-2 record in Sun Belt play. Recently, Coastal has had a few duds with unimpressive wins over Troy and a close loss to Georgia State, but this is a solid team that does a few things really well.

The first is that Coastal is a sharpshooting team from distance. The Chanticleers have buried 39.3% of their three-point attempts, which ranks 18th in the nation. They take a three 40.5% of the time overall, so they’ve really been able to maximize that skill. In conference play, things are even better with a 40.4% clip from three and they’ve taken one 43.6% of the time.

The second thing that Coastal Carolina does really well is attack the offensive glass. They are second in the Sun Belt Conference in ORB% at 32.9% and ninth in the nation overall at 36.3%. They’ve played a terrible schedule so far this season, so it is fair to poke some holes in what they’ve done so far, as their schedule ranks 331st in the nation per Bart Torvik. But, they’ve done pretty much what they’re supposed to do against it.

The third thing the Chants do really well, at least in conference play, is defend. Through seven games, their eFG% against on defense is 47.7%. Opponents are only shooting 33.5% from three and 45.9% from two. Those marks are third and second, respectively, in conference games.

If there is one glaring flaw with this Coastal team, it is the TO% on offense. Coastal ranks seventh in conference with a 20.9% TO%. They rank 273rd in the nation overall at 21.4%. They’re getting back some of those lost possessions with offensive rebounds, but still have failed to take good enough care of the basketball.

So, while the Eagles force a lot of turnovers, they also find ways to give back some of those extra possessions. They are a decent offensive rebounding team, so there really is a lot of give and take with their statistical profile.

The team’s three-point shortcomings aren’t only on the offensive side. Georgia Southern has allowed opponents to shoot 39.5% from deep, which ranks 336th in the nation. They defend okay on the interior, but have not defended well on the perimeter. Opponents have taken note, taking 42.6% of their shots from beyond the arc.

Interestingly, in conference play, Georgia Southern has done a better job defending the three and opponents have taken fewer shots from there. It does seem as though they’ve made an adjustment. On the other hand, they’re the worst team in adjusted offensive efficiency in the Sun Belt during conference play. If it’s not one thing, it’s another.

My guess here is that this line is moving because Georgia Southern forces a lot of turnovers and Coastal Carolina doesn’t take great care of the basketball. The problem I have with that is that Georgia Southern also takes a lot of threes that they don’t make and gives up a lot of offensive rebounds. Empty possessions and finding ways to neutralize your turnover prowess make it really hard to win games and cover spreads.

I’m on Coastal Carolina here. It’s a game I circled earlier in the week based on a lot of different matchup factors and I do like it. I also think Coastal, the better team, can dictate the tempo of this game to their liking as well.

Get Ready for Over 1,000 Super Bowl LV Props at BetOnline Sportsbook