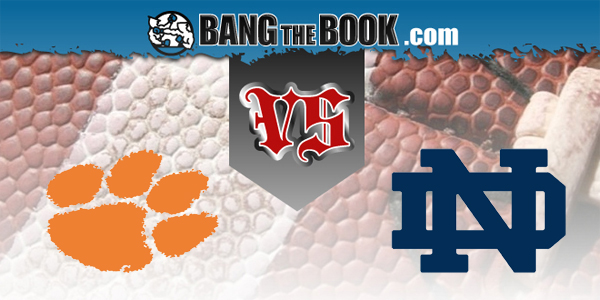 The Notre Dame Fighting Irish have never been part of a conference. They’ve played a lot of big games as an Independent program and a national powerhouse, but to say that the game on November 7 against the Clemson Tigers is up there with some of their other marquee matchups is an accurate statement.

This is not a College Football Playoff elimination game by any means for Clemson, but it would be for Notre Dame if they are unable to upset DJ Uiagalelei and Dabo Swinney in South Bend. The line has bounced around in the “dead zone” between -4 and -6 throughout the week, as bettors are trying to figure out what Trevor Lawrence’s absence means to the line.

Bovada Sportsbook is among the operators at -6 with a total of 50. Bookmaker Sportsbook, known for taking sharper action than some of their colleagues, is sitting on -5.5 with the total at 50.5.

The fact of the matter is that there is a great unknown in this game and that is Uiagalelei. The freshman heir apparent to the QB throne in upstate South Carolina came all the way across the country from California to play for the perennial power. He’s got excellent size at 6-foot-4 and 250 pounds, but it is fair to wonder how big and bright the moment is here for the kid. After all, he had 19 career pass attempts, 11 against The Citadel, before stepping in on short notice last week because Lawrence contracted COVID-19.

Uiagalelei was 30-of-41 for 342 yards with a couple touchdowns and a rushing score. He had six carries for 25 yards. DJ’s bruising size could be a weapon for Clemson down the line, but don’t expect to see the big man carrying the mail a lot here with even bigger questions down the depth chart in Lawrence’s absence. If nothing else, a spotlight game of this magnitude is a great lid-lifter for some of the games he’ll be expected to play in when Trevor Lawrence is a member of the New York Jets.

As smart quarterbacks do, Uiagalelei relied heavily on Travis Etienne in his first game. Etienne ran the rock 20 times for just 84 yards, but had seven catches for 140 yards. Getting Etienne 20+ touches a game sure seems like a recipe for success and he’s been used more as a receiver this season.

While the numbers ended up being impressive for Clemson, they did trail Boston College 28-13 last week prior to outscoring the Eagles 21-0 in the second half. That won’t fly against a much better Notre Dame team. We’ll see if it was nerves or an off half for the defense of Brent Venables or what.

While Uiagalelei, Etienne, and the offense will get a lot of the talk, it may be the Clemson defense that has to prevail here. The undefeated Irish have enjoyed a 7/1 TD/INT ratio from senior signal caller Ian Book, also a California native. Kyren Williams had led a ground game with 5.1 yards per carry on the season. Williams has 5.7 yards per pop and seven of the team’s 18 rushing scores. Book has been an effective scrambler with five rushing touchdowns on his 51 attempts.

The problem for Notre Dame in this game, however, is that they rank 32nd in yards per play. While Clemson’s offense only ranks 24th, a noticeable drop from last season’s fourth-place mark in that department, moving the ball methodically without big plays is a tough way to upset the #1 team in the country.

When we think back to how Nick Saban’s teams lost, it would be to teams that had fast, athletic skill players and quarterbacks that could improvise like Johnny Manziel or Bo Wallace. While Book has run around a little, he’s not a dual-threat guy. While the Fighting Irish are good, they are not Ohio State or last year’s Clemson team. They are not even the 2017 Clemson team.

Notre Dame is 11-32-1 ATS since 1994 against teams that finish in the AP Top 10. It’s a large swath of time, and there haven’t been a lot of those games lately, but the Fighting Irish are a solid, non-elite team. Athletically, they don’t stack up with the SEC and ACC teams. Whether that is a byproduct of higher admission requirements or geography, these are games they lose because they are simply out-talented.

My expectation is that this game plays out the same way. Notre Dame runs a pretty traditional offense and you can’t go one-on-one against the players in the Brent Venables defense and win enough of those battles. If the crowd noise was cranked to 11 and Uiagalelei was making his first road start in a hostile South Bend environment, that might be an equalizer. It won’t be, so it isn’t.

Clemson is the play.