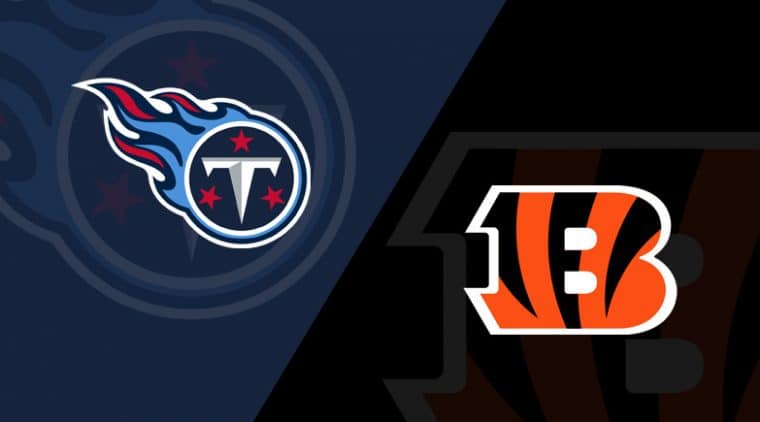 The 2022 NFL Divisional Playoffs kick off Saturday, January 22, 2022, with the AFC showdown from Nissan Stadium in Nashville, Tennessee, so we bring you the best Bengals vs. Titans betting pick along with the latest odds update on MyBookie Sportsbook.

Cincinnati meets Tennessee for the first time since November 2020 when the Bengals beat the Titans 31-20 as 7-point home underdogs. The Bengals are 3.5-points road dogs this time around, while the totals are set at 47.0 points.

The Bengals barely outlasted Las Vegas in the wild-card round

The Cincinnati Bengals (11-7; 11-7 ATS) defeated the Las Vegas Raiders 26-19 in the wild-card round of the 2022 NFL playoffs, covering a 6-point spread in front of the home fans. However, it wasn’t a comfortable victory for the Bengals, who scored only a couple of field goals in the second half.

Joe Burrow led the way for Cincinnati last weekend, tossing for 244 yards and a couple of touchdowns. Rookie wideout Ja’Marr Chase had nine receptions for 116 yards, while tight end C.J. Uzomah posted six catches for 64 yards and a touchdown.

The Bengals had only 83 rushing yards on 25 carries against the resilient Raiders’ defense. At least, they took good care of the ball, while the Raiders committed a pair of turnovers, including Derek Carr’s interception with 17 seconds left on the clock in the fourth quarter.

Cincinnati managed to grab its first playoff win since 1990. The Bengals have gone 4-1 straight up and 5-0 ATS over their previous five games overall.

The Titans aim for their fourth straight W

The Tennessee Titans (12-5; 10-7 ATS) enjoyed a bye in the wild-card round after clinching the No. 1 seed in the American Football Conference. They retained the AFC South crown despite missing Derrick Henry in the final nine weeks of the regular season.

Henry suffered a foot injury in Week 8. He’s been outstanding in the first half of the season, posting 937 yards and ten touchdowns on 219 totes. Henry should return to the starting lineup Saturday against the Bengals, but he’ll probably be on limited reps.

D’Onta Foreman, who replaced Henry in the backfield, finished the regular season with 566 rushing yards and three touchdowns on 133 totes. Ryan Tannehill threw for 3,734 yards, 21 touchdowns, and 14 interceptions, while WR A.J. Brown posted 63 receptions for 869 yards and five touchdowns.

The Titans made it to the postseason for the third consecutive year. They are riding a three-game winning streak following a 28-25 road victory over the Houston Texans in Week 18. Tennessee has gone 3-5 ATS in its previous eight outings at any location.

The Titans own the second-best run D in the NFL, allowing only 84.6 rushing yards per game. Also, they surrender just 3.9 yards per carry (4th), but the Titans’ secondary is a problem, yielding 245.2 passing yards per contest (25th).

Hereof, I’m expecting the Bengals to keep it close on the back of their passing offense. Joe Burrow is doing a superb job in his second professional season, while Ja’Marr Chase is enjoying a wonderful rookie campaign. The Bengals should have enough firepower to deal with the Titans’ offense. Cincy surrenders 22.1 points per game (17th) on 102.5 rushing yards (5th) and 248.4 passing yards (26th).

I’m expecting the Bengals to take advantage of the Titans’ passing D, while Tennessee should look for the same thing on the other side. Cincinnati’s secondary has had some issues in the regular season, and the Titans possess some deadly weapons in A.J. Brown and Julio Jones.

Five of Cincinnati’s last eight contests have produced more than 47 points in total. On the other hand, the under is 4-1 in Tennessee’s last five outings and 8-2 in the Titans’ previous ten home contests.