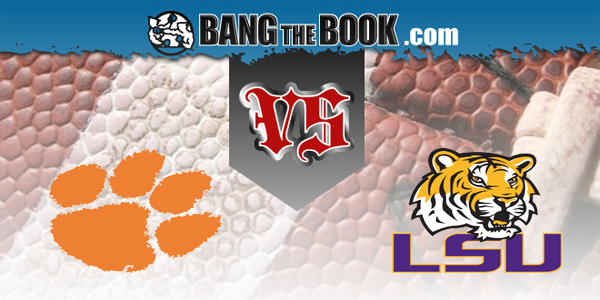 Even though it is called the 2020 College Football Playoff National Championship Game, the matchup between the Clemson Tigers and the LSU Tigers on Monday January 13 will decide the 2019 college football national champion. Some would say that these are the two best teams in the country. Others would say that Clemson faced the #2 team in the country in its win over Ohio State.

Whatever is being said about this game, know that LSU is anywhere from -5 to -6 as of New Year’s Eve with a total anywhere from 69 to 70. Also know that if this game had been played at the end of the regular season, Clemson could very well have been a favorite. At a minimum, LSU wouldn’t have been higher than -1.

Did the previous two games for each team really swing the balance that much? LSU rolled over Georgia with a dominant performance in the SEC Championship Game and Joe Burrow put on a dazzling show in the first half against Oklahoma that put that game away by the intermission in the first College Football Playoff Semifinal.

Clemson did what it needed to do with a win over Virginia and then got taken to the final minute by Ohio State. Let’s also call it what it is. Ohio State was the better team in that game. The Buckeyes left a ton of points on the field in the first half and also fell victim to what is being considered a terrible replay review ruling on a scoop and score in the second half that would have given Ohio State the lead.

That was the knock on Clemson all season long. Through no fault of their own, Dabo Swinney’s team hadn’t played anybody. Now they have. And they did enough to win. But, they didn’t do enough to impress oddsmakers or bettors. Now we have a growing favorite in LSU that is power-rated as the top team in the country. This line effectively amounts to close to a touchdown difference in perception between the two teams from what we saw at the tail end of the regular season.

Is it warranted? Is it justified? We have a lot of time to decide.

Oklahoma wasn’t the fourth-best team in the country. Any of the top three teams would have likely taken Oklahoma to the woodshed. Maybe not to the degree of LSU, who scored 49 first-half points and 14 more in the second half for good measure in the 63-28 win. It was a highly emotional day with the death of Carley McCord, the daughter-in-law of offensive coordinator Steve Emsinger. The additional layoff means that the LSU family has some time to process the loss and be there for Emsinger.

Emsinger was coaching with an obviously heavy heart, but it didn’t show, as he and Joe Brady called a dynamic game that allowed Burrow to throw for 493 yards on just 29 completions, seven of which went for touchdowns. Fourteen of the completions went to Justin Jefferson and so did four of the touchdowns. Jefferson had 227 yards receiving.

Clyde Edwards-Helaire actually had two carries for 14 yards. With the additional break in between games, LSU should have him back at something resembling full strength and that would go a long way. We saw JK Dobbins slice and dice through the Clemson defense before he suffered an ankle injury. Edwards-Helaire is plenty capable of doing the same thing.

Clemson was outgained 516-417 by Ohio State. The Buckeyes fell on the wrong side of just about everything in that game. They were -2 in turnover margin. They were terrible in the red zone. They were the victims of a targeting call that got Shaun Wade kicked out of the game. Before Wade left the game, Clemson had done nothing on offense. After Wade’s targeting call was confirmed by review, the Clemson offense had far more success.

The Buckeyes bottled up Travis Etienne in the running game, but not in the passing game, as Etienne maximized his three receptions for 98 yards and a couple touchdowns. They also failed to account for Trevor Lawrence as a runner. Lawrence had 107 yards on the ground, including a 67-yard scamper for six.

Was it a performance worthy of knocking Clemson down a few pegs? You could certainly say that. It was easily Clemson’s worst defensive performance of the season and it didn’t inspire a whole lot of confidence with Burrow on the horizon. The Tigers did sack Justin Fields four times, but a knee injury limited his mobility. Most of the sacks came in the second half after defensive mastermind Brent Venables made adjustments.

LSU has been great in its major tests. Clemson has only had one major test and could very well have lost in blowout fashion if the Buckeyes didn’t settle for three first-half field goals in the red zone. Give Clemson credit for making adjustments and making plays. But, it’s fair to wonder if they’ll get the same opportunities against LSU.

Recency bias is a real thing, but remember that Clemson closed -2.5 against Ohio State. Are we really saying that Ohio State would be +8.5 against LSU? Is that a thing?

Now, we also have to factor in that LSU is playing this game in New Orleans, so there will be a ton of purple and gold in attendance. Clemson fans traveled very well out to Arizona. Tickets are going to be much harder to come by in the Big Easy. LSU may be getting as much as 2 or 2.5 points for home field in the minds of some. Does LSU -3 make more sense? Is that a fairer number?

I hate to keep asking questions when you came here for answers, but that really is the story of this game. Are the recent performances for the two teams enough to make LSU a favorite of this magnitude? That yes or no question is remarkably complex, but it is the answer to this handicap. If your answer is yes, then you are on the LSU side. If you’re answer is no, then you are on the Clemson side.

Personally, my answer is no. This line is now too high. Georgia’s offense really wasn’t very good. As impressive as that win looks on paper, the Bulldogs couldn’t compete with LSU. Oklahoma sure as hell couldn’t. Clemson stacks up from a talent standpoint. Dabo’s Tigers spent a lot more energy in their win than Coach O’s Tigers did, but that still isn’t enough for me to get to this high of a number on the game.

The Buckeyes had 5.34 yards per play in the second half once Clemson adjusted. Suffice it to say that they were caught off-guard playing a team that athletic and that talented. But, they made adjustments. They confused Justin Fields. They gave him odd-man fronts and got more pressure. Yes, they also got fortunate that JK Dobbins went out and that Master Teague just isn’t good enough to be on Dobbins’s level.

Again, though, this line is just too high as far as I’m concerned. Even if Clemson could have and maybe in some respects should have lost to Ohio State, doubting Dabo isn’t an option now that he is 10-1 SU and 9-2 ATS in his bowl and CFP games dating back to 2012.