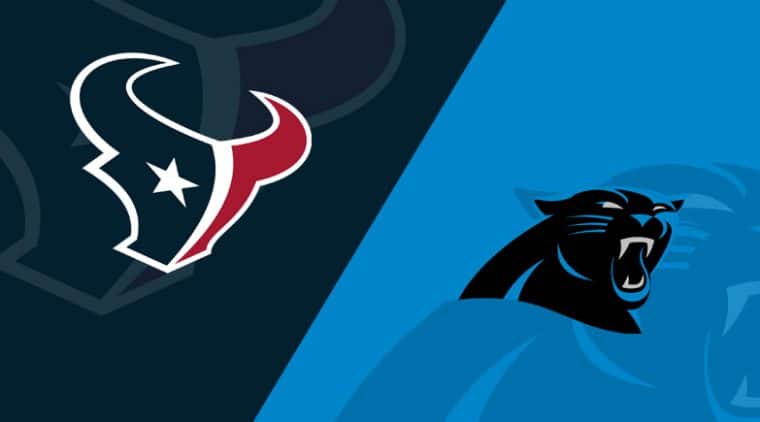 Week 3 of the 2021 NFL season kicks off with Thursday Night Football from NRG Stadium in Houston, Texas, so here’s the best Carolina Panthers vs. Houston Texans betting pick along with the latest team news, odds update, and betting trends.

The Panthers take on the Texans for the first time since 2019, and Carolina is 3-0 straight up and ATS in its last three encounters with Houston. The visitors are firm 7.5-point favorites for Thursday’s clash, while the totals sit at 43.0 points on MyBookie Sportsbook.

After a 19-14 home victory over the New York Jets in the opener, the Carolina Panthers improved to 2-0 straight up and ATS on the season with a 26-7 thrashing of the New Orleans Saints in Week 2. It was another strong defensive performance, as the Panthers held the Saints to just 128 total yards while picking off Jameis Winston twice.

On the other side of the ball, Carolina racked up 383 total yards and 28 1st downs. Sam Darnold went 26-of-38 for 305 yards, two touchdowns, and an interception. D.J. Moore had eight catches for 79 yards and a TD, while Christian McCaffrey carried the pigskin 24 times for 72 yards and a TD.

CMC also had five receptions for 65 yards against the Saints. As long as McCaffrey stays healthy, the Panthers’ offense should torture its opponents, while Sam Darnold has thrived under pressure through his first two appearances with Carolina. Back in Week 1, Darnold threw for 279 yards and a TD, completing 24 of his 35 passing attempts.

The Houston Texans (1-1; 2-0 ATS) are coming off a 31-21 defeat at the Cleveland Browns this past Sunday, covering a huge 13.5-point spread at FirstEnergy Stadium. They were tied at 14-14 at halftime, and the shorthanded Texans couldn’t keep the pace in the second half after their starting QB Tyrod Taylor left the game with a hamstring injury.

Taylor was 10-of-11 for 125 yards and a TD. He also scored once on his own, but rookie Davis Mills completed just eight of his 18 passing attempts in the second half and finished with a touchdown and an interception.

The Texans allowed 156 rushing yards on 34 carries to the Browns. Back in Week 1, they beat the Jacksonville Jaguars as 3.5-point road underdogs, 37-21, racking up 449 total yards and surrendering 395 in a return. The Texans picked off Trevor Lawrence three times, but the Jags had 76 rushing yards on just 16 totes.

The Texans have played above expectations through the first two weeks. However, without Tyrod Taylor, their offense will have a mountain to climb against this Carolina team. Davis Mills is a bit of a mystery and didn’t show a lot last weekend, though he faced one of the best defensive units in the league.

I don’t feel comfortable with a 7.5-point spread, but backing the Texans with a rookie under center doesn’t make sense. The Texans’ defense will have to make a lot of stops to keep the hosts close, and the Panthers’ offense is looking good with CMC in the backfield and Sam Darnold under center.

I’m expecting the Texans to struggle a lot on the offensive end, considering their QB situation. On the other side, the Panthers have been terrific defensively thus far. They’ve allowed just 93 rushing yards in total (2.7 per carry) while leading the NFL with ten sacks.

Hereof, I’m backing the under, expecting the visitors to control the clock and put some pressure on a rookie quarterback. The under has hit in the Panthers’ previous five games overall, while the over is 4-1 in Houston’s previous five outings.