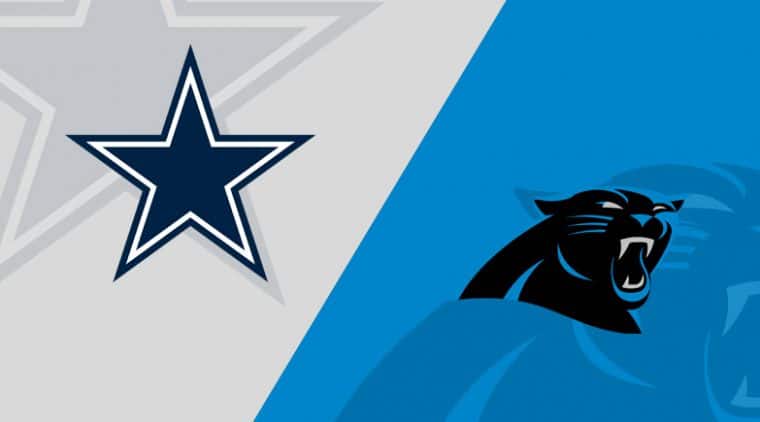 Week 4 of the 2021 NFL season continues Sunday, October 3, 2021, when we’ll see the NFC showdown at AT&T Stadium in Arlington, so here’s the best Panthers vs. Cowboys betting pick along with the latest team news, stats, and betting trends.

Carolina meets Dallas for the first time since 2018, and the Panthers have gone 2-0 straight up and ATS over their previous two dates with the Cowboys. The visitors are listed as 4.5-point road underdogs for this one, while the totals are set at 50.5 points on BetOnline Sportsbook.

Can the Panthers overcome CMC’s absence?

The Carolina Panthers improved to 3-0 SU and ATS on the season following a 24-9 road victory over the Houston Texans in Week 3. However, Christian McCaffrey suffered a hamstring injury and will be sidelined for a few weeks which is a massive blow for the Panthers’ offense that is averaging 23.0 points on 390.3 total yards per game.

CMC has had 68 touches for 364 yards from scrimmage through the first three weeks of the new season. Last year, he appeared in just three games because of multiple injuries, and the Panthers have struggled offensively for most of the 2020 season.

Anyway, the Panthers will continue to lean on their defense. They are yielding only 10.0 points on 191.0 total yards per contest so far this term. Furthermore, the Panthers have recorded 14 sacks while allowing their opponents to convert only 21.2 percent of their 3rd downs.

Will the Cowboys continue to run efficiently?

The Dallas Cowboys (2-1; 3-0 ATS) decided to run the ball as much as they can in 2021. It’s paying off early in the season, as the Cowboys have won two straight contests following a tough 31-29 defeat at the reigning champs, Tampa Bay, in the opener.

Dallas racked up 198 rushing yards in a 20-17 road win at the LA Chargers in Week 2. Last Monday, the Cowboys destroyed Philadelphia at home, 41-21, rushing for 160 yards on 41 attempts. Ezekiel Elliott had 17 totes for 95 yards and a couple of scores against the Eagles, while Tony Pollard added 11 carries for 60 yards. Back in Week 2, Pollard had 13 carries for 109 yards and a TD.

The Cowboys are tallying 30.0 points on 416.7 total yards per game. They are yielding 23.0 points on 402.0 total yards in a return, but the Cowboys have already recorded six interceptions, showing signs of improvement compared to a woeful 2020 campaign. Still, Dallas is surrendering a whopping 331.7 passing yards per contest.

Something’s got to give here, as both teams are perfect against the spread in 2021. I’m going with the Cowboys to win by at least a field goal, as their offense should be a decisive factor. The Panthers’ defensive unit has been outstanding through the first three weeks, but this will be the first proper test on the road.

CMC’s absence will be too much, and the visitors will have to lean on Sam Darnold a lot. He’s been solid thus far, throwing for 888 yards, three scores, and a pick, but without McCaffrey in the backfield, the Panthers might struggle to move the ball. Dallas’ secondary is arguably fragile, but if the Cowboys continue with their balanced attacking approach, they’ll come out on top.

The total has gone over in nine of Dallas’ last 11 outings at home, including the previous four. On the flip side, the under has hit in Carolina’s last six games overall. I’ll take the under, expecting the Panthers to lean heavily on their defense, while their offense won’t be as sharp as usual without Christian McCaffrey.

Anyway, we should also see both teams trying to exploit each other’s secondary. The line at 50.5 points is a tricky one, and I would stick with the Cowboys to cover.