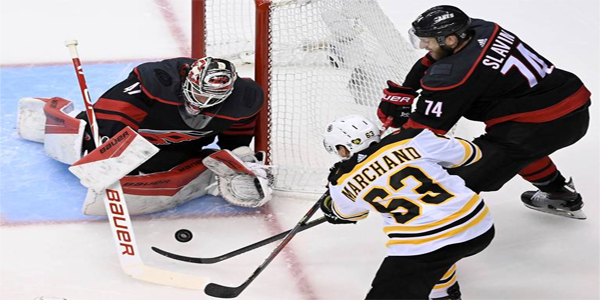 Many people wondered whether or not the Boston Bruins hurt themselves by not caring a whole lot about the Round Robin games. They were in the driver’s seat for the President’s Trophy and were going to be the #1 overall seed in the NHL Playoffs. Then COVID-19 shut it all down. Then the NHL came up with a 24-team playoff with a Round Robin setup for the top four seeds in each conference.

They lead that team 3-1 and can knock them out of the playoffs with a win on Wednesday afternoon as a -155 favorite at BetDSI Sportsbook. The Carolina Hurricanes are +135 on the other side to keep their playoff hopes and dreams alive.

The Bruins flipped the switch when this series began. They wound up with 43 scoring chances at 5-v-5 in Game 1 and came away with a 4-3 win. They did lose Game 2, which was Carolina’s best performance of the series, but they responded with wins in Game 3 and Game 4 and were the better team at 5-v-5 in each of them.

Tuukka Rask left the bubble after two games. Jaroslav Halak is 2-0 with 45 saves on 49 shots. The Bruins have done well to limit Carolina’s opportunities in the two games that Halak has played. Halak wasn’t as good as Rask during the regular season. In fact, from from it, as Rask had a .929 SV% and a 22.51 goals saved above average mark to Halak’s .919 SV% and 8.83 GSAA, but he is one of the most capable backup goaltenders in the playoffs.

Furthermore, Halak wants to be there. It was pretty clear that Rask, who has young children at home, had his thoughts elsewhere while stationed in the bubble. It’s not like he played bad in the postseason, but your goaltender needs to be fully focused and engaged. Rask was not and everybody wished him the best as he put his family first. It just means that Boston’s goaltending depth gets a chance to shine.

Goaltending was a problem for Carolina all season long. Petr Mrazek has been better than James Reimer in the playoffs and probably has the higher ceiling, but it was Reimer that had the better regular season. He was at 3.38 GSAA and Mrazek was at -5.35. Reimer had the better save percentage and goals against average. Mrazek played more often.

This series could be in a different spot had the Hurricanes finished off Game 4. They led 2-0 after 47 minutes, but allowed four goals to the Bruins in less than seven minutes to trail 4-2. Teuvo Teravainen scored to make it 4-3, but the Hurricanes could not find the equalizer.

You have to wonder how they’re feeling after that massive collapse. You also have to wonder how Carolina can generate enough offense to extend the series after managing just 25 scoring chances at 5-v-5 over the last two games. The loss of Andrei Svechnikov has been a big deal. The Hurricanes don’t have a ton of forwards that can generate consistent scoring chances. Svechnikov had a goal and a helper in the series before getting taken out with a really questionable play by Zdeno Chara in front of the net. It sure seemed to change the complexion of the series a little bit. Others have tried to step up in Svechnikov’s absence, but the Hurricanes just don’t quite look the same.

With goaltender questions and a lack of offense, the Hurricanes have a lot of adversity to overcome in Game 5. They can do it, but it seems like a real uphill battle against a Bruins team that looks nothing like what we saw in the Round Robin games.

They finish this series on Wednesday.

BET THE BOSTON BRUINS AT BETDSI TO WIN GAME 5!