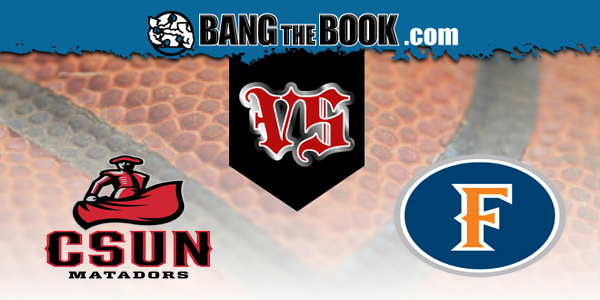 After a huge college hoops card on Saturday, we scale back a little bit on Sunday. There are still a lot of games for your viewing and wagering pleasure, but you’ll have to be quick because there aren’t really any late games on the card. In fact, the only games that start at 6 p.m. ET or later are Virginia Tech vs. Wake Forest, Lafayette vs. Loyola (MD), Tarleton State vs. Weber State, and Cal State Northridge vs. Cal State Fullerton.

That means slim pickings for our spotlight game, as we try to pick a late one to give readers as much lead time as possible to consume the content. Since it’ll be a chase game for some as the latest sporting event of the evening, we’ll look at that Northridge vs. Fullerton matchup.

Last night’s game was a doozy. The Matadors returned from a lengthy COVID pause to win by a point on the road in an 86-85 game played to 80 possessions. The Titans, who had a COVID pause of their own from December 13 to January 1, will look to bounce back tonight in a game that is lined pick’em at Bovada Sportsbook with a total of 149.

More commonly known as CSUN, the Matadors went from December 28 to January 16 without playing a game because of a COVID pause. Their last game before the break was an outstanding win over New Mexico State by three points. Their first game back was the conference opener and an 86-85 triumph last night over Fullerton.

CSUN was 15-17 last season with a 10-6 mark in conference play. The Matadors were among the worst defensive rebounding teams in the country and a terrible defensive squad. This season, they’ve improved in both areas, but especially on the defensive rebounding front, at least to this point. I would expect that DRB% to regress.

CSUN ranks 334th in Block% on defense. They foul a lot. There isn’t a ton of length to this lineup. Some of the freshmen have come in and done a nice job on the boards, but the returnees don’t really bring a lot of defensive rebounding prowess to the table.

The Matadors are only shooting 46.6% from two-point range. In fairness, they did play a decent non-conference schedule with Stanford, Cal, and Pepperdine, so that has skewed some of the numbers. There appears to be some sample size concerns with the metrics to this point, as CSUN was a top-80 offense last season in adjusted offensive efficiency and 81st in eFG% on offense.

Longtime Fullerton head coach Dedrique Taylor is in a tough spot in this game. The Titans have only played six games, but three of them have been losses by eight combined points. Even Cal State Fullerton’s win was by three in overtime over Long Beach State. They’ve played a lot of close, down to the wire games so far and the quick turnaround is a tough one.

Of course, they did bounce back from a two-point loss to LBSU to win the next night in overtime, so they’ve already shown some resilience. In the first game after the COVID pause, the Titans lost to UC Santa Barbara by 18. They’ve been in every game since.

Last night’s offensive outburst was an outlier, though. Since Taylor has been at CSUF, the team has peaked at 204th in adjusted offensive efficiency per Bart Torvik and that came way back in 2016. They’ve been a bottom-75 offense each of the last two seasons. This is a team that has to win with defense and they have struggled to be consistent on that end as well.

Fullerton has been forced into playing at a quicker tempo than usual because of the teams that they’ve played. With a bad offense, Taylor probably doesn’t want to get caught up in too many track meets, but this is a team that doesn’t have much of an identity of its own.

Fullerton hit 11 threes in 27 attempts last night. That seems unlikely to be replicated in this one. Northridge isn’t a great jump shooting team either and went 10-for-25. The tempo makes it hard to take an under in this game, though, as we could very well see a game in the upper 70s in possessions again and neither team is that great defensively.

Northridge opened -1 last night and Fullerton got bet to -2 with the Matadors off of the lengthy COVID pause. Today, the line sits at PK. I’ll take Fullerton tonight. The Titans had a lot of foul trouble concerns in last night’s game and that limited the play of certain guys. It also allowed top 2020 recruit Tory San Antonio to go off for 21 points. Maybe the Titans found something new that will work.