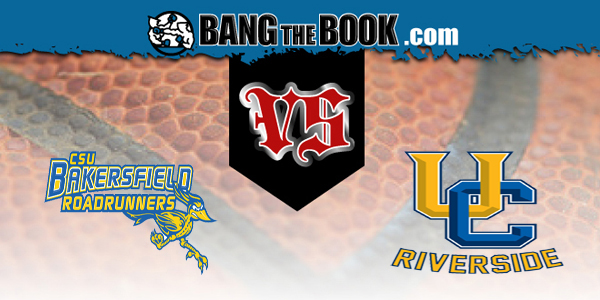 A huge Friday night card is a rarity in college basketball, but nothing is normal about this hoops season. Friday night just means that we have a lot of games to handicap and also a lot of games on the card to consider. It also means a lot of Friday/Saturday back-to-backs, so keep that in mind.

Of all the games on the board, only one ranked team is in action and that is the Michigan Wolverines. That means it’s a good night for us to do what we do best and find an under-the-radar game from a mid-major or low-major conference and highlight it. We got a nice, easy winner that way with USF and Santa Clara under last night.

Tonight, we’ll put Cal State Bakersfield and UC Riverside in the spotlight. The last time we did a Big West game, it went over really well as Sunday night’s chase game between Cal State Northridge and Cal State Fullerton. We’ll hope for the same here, as Riverside has been bet up from -2.5 to -4 at Bookmaker Sportsbook with a total of 122.5.

The Roadrunners haven’t necessarily outsmarted teams the way that the Road Runner outsmarted Wile E. Coyote on the Looney Tunes, but Rod Barnes’s team is off to a 5-1 start as a first-year member in the Big West Conference. Coming over from the WAC, the Big West provides a lot more stability and a much easier travel schedule for the boys from Bakersfield.

To this point, they’ve taken it all in stride. The lone conference blemish is a one-point overtime loss to Long Beach State in the team’s first-ever Big West contest. A sweep on the island over the Hawaii Rainbow Warriors was a really impressive feat last week and now Bakersfield will vie for more dubs back on the mainland.

The first thing to know about the Roadrunners is that they are a methodical bunch. Bakersfield ranks 336th in adjusted tempo per Bart Torvik and keep in mind that not all 355 teams are playing this season. Bakersfield has been bad on offense for the season with a 45.3% eFG% on offense. They’re only shooting 30.9% from 3 and 45% from 2. In conference action, those numbers have improved to 32.3% and 45.6%, respectively.

There are two things that set Bakersfield aside from the rest in this conference, though. The first is that they play good defense. By adjusted defensive efficiency, this is the second-best defense in conference play and the second-best team at forcing turnovers. The other thing that Bakersfield does well is pull down offensive rebounds. Their 43.4% ORB% mark in conference action is tops and their 41.5% mark overall is second in the nation.

One way to make an inefficient offense better is to get second-chance looks at the rim. Bakersfield is only shooting 55.6% on “close twos” as defined by Torvik and has only converted 72.2% of dunk attempts. Some positive regression is likely on offense here.

First-year head coach Mike Magpayo has done really well with Riverside to this point. The Highlanders have shot the lights out from distance, coming in at 39.3%, which is 18th in the nation. They are inside the top 100 on 2P% as well. Somehow, they are 335th in the nation in FT% at 60.6%.

Riverside takes a lot of threes, though they have taken them at a lower rate in conference play. They’ve also been the best offense by two-point percentage in the conference so far at 54.2% en route to a 3-1 conference mark. They’ve also really buckled down defensively, holding opponents to a 27.9% mark from distance and a 43.1% mark on two-pointers. Both of those rank in the top 20 nationally.

How much can things have really changed, though? Magpayo is seemingly doing an excellent job, but this is a Riverside team that was 320th in the nation in 3P% defense last season. They were a losing team in conference play under David Patrick. Patrick did improve the program greatly in his two seasons, but got an offer to be an assistant at Arkansas and took it. Magpayo was his assistant here.

The Highlanders have five guys shooting at least 40% from three-point range, which seems unlikely to continue. They are also shooting 46.5% in the mid-range, which is an area of the floor where other teams are actively trying not to shoot from because it is a shot with generally less return on investment than threes or close twos.

In other words, I look at Riverside as a regression candidate and I look at Bakersfield as a real handful for teams seeing the Roadrunners for the first time. They were a quality program in the WAC with a physical brand of basketball that we don’t typically see from the Big West schools. It isn’t anything that Riverside has seen to this point.

Bakersfield’s physicality has the chance to put this game at the free throw line often. They are a much better free throw shooting team. Riverside doesn’t force turnovers and Bakersfield is so good on the offensive glass that the Roadrunners should end up with more possessions.

Despite the line move against me here, I like Cal State Bakersfield +4.