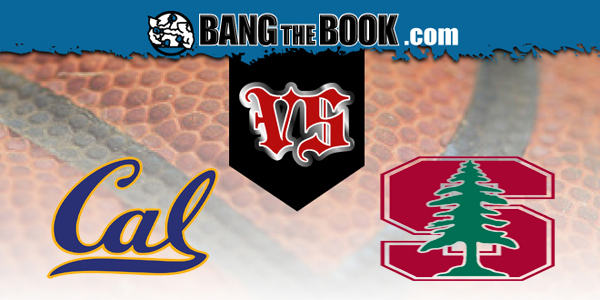 In a year unlike any other, the Pac-12 has become a Man of the People. Bettors have been clamoring for a college basketball game following the Super Bowl for years and they’ve got the chase game that they’ve always wanted. Cal and Stanford will take the floor at 10 p.m. ET in Palo Alto for some #Pac12AfterDark action.

Stanford is -10.5 with a total of 132 at Bovada Sportsbook. With customers either riding the wave of the Super Bowl or looking to make a few bucks back from a bad showing in the Big Game, we’re going to see a massive handle on this game. It could very well be the most bet regular season game of the season to this point, either because people have an edge or because it exists and you can bet on it. You can also watch it on FS1.

As the spotlight game here, we’ll break it down from both sides and also tip a cap to the Pac-12 for being everybody’s favorite conference for at least a day.

Cal is off to a 2-11 start in conference play. Nobody said this was going to be a good game, but it’s going to be a post-Super Bowl game, damnit, and that will get some attention. Opponents are firing away at 39.8% from distance against Cal, which is a primary factor as to why the team has played so poorly in conference action. It doesn’t help that Cal is shooting 33.6% on three-point attempts themselves and that they’re taking a three-pointer over 42% of the time.

If we look specifically at the numbers in the 13 Pac-12 games, Cal is 11th in adjusted offensive efficiency and 11th in adjusted defensive efficiency. The success rate on threes is a touch higher at 33.8%, but opponents have made 40.9% of their triple tries against Cal. Of course, they’ve also had great success on two-point shots as well with 52.7% of those going in the cylinder.

There are a myriad of problems with this Cal team. They don’t take care of the basketball relative to other teams in the conference. They are the conference’s worst free throw shooting team. It’s just pretty much all been bad for Mark Fox. This is only Fox’s second season in Berkeley, but things are off to a rather inauspicious start. Top recruit Monty Bowser has barely played and juniors Matt Bradley and Andre Kelly have been the only reliable scoring threats.

Bradley is the team’s top three-point shooter and Kelly is the team’s best finisher inside the arc. Cal has only topped 70 points in two conference games and won both of those. Otherwise, they’ve been held in check on the offensive side and don’t play nearly good enough defense to win low-scoring games.

Stanford has a very solid defense under head coach Jerod Haase, but the team has left some wins out there on the floor. The Cardinal rank 18th in the nation in adjusted defensive efficiency, but only sit at 11-7 and just 7-5 in Pac-12 play. Stanford, like Cal, struggles to take care of the basketball, putting a lot of pressure on the defense to get stops. Fortunately, the defense has gotten a lot of those stops, but Stanford doesn’t shoot many three-pointers and it sure seems like teams that are bombing away are the teams having the most offensive success this season.

Stanford is 313th in 3P Rate in the nation, which is probably for the best because the Cardinal have only made 31.3% of their three-point attempts. They are shooting 53% inside the arc, though, and have gotten to the free throw line a ton throughout the course of the season. They’ve also made the most of those free points by shooting 73.7% at the charity stripe.

Two-point defense has been the star of the show without the basketball for Stanford. Opponents are only shooting 45.1% on two-point attempts. That number does go up to 47% on two-pointers in conference play, but is still the third-best mark in league action. It is hard to fathom how Stanford is second in eFG% defense and third in eFG% offense in conference play, but just 7-5.

These two teams just played in Berkeley on Thursday and Stanford won 70-55 in a game played to 67 possessions. Stanford’s two-point defense was on full display and Cal’s mostly inept offense was as well. I don’t see any reason to expect this game to be a whole lot different.

It is scary to play an under with a team like Stanford that gets to the free throw line a lot, but they are a deliberate team on offense and should get margin in this game again, which will allow them to hold the ball longer on second-half possessions.

I’ll look under 132 in this late game, but this isn’t a strong play. Just action because this is a seminal sports betting moment to have a game after the Super Bowl.

GET A 100% DEPOSIT MATCH BONUS AT BOVADA SPORTSBOOK