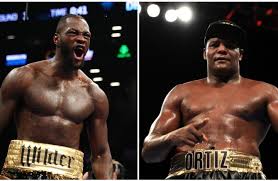 Boxing Betting — WBC Heavyweight Title: Will it Be Sweeter for Ortiz the Second Time Around?

Yeah, fewer people care about heavyweight championship fights than they used to. But that doesn’t mean we can’t have explosive matchups. Saturday night’s bout between WBC heavyweight champ Deontay Wilder and third-ranked Luis Ortiz could be such a fight, although you may have to sit through it for a while first.

Fox is betting that enough fans will be willing to pay $74.99 to make it worth their while. I’ll be interested in seeing that buy rate, if we can get an accurate figure.

But for now, here we go…..these are the odds on the fight, as they are posted by the folks at BetAnySports:

** Expect the main event to go at about Midnight ET

This is a rematch of a fight that took place in March 2018, when Wilder took advantage of a tiring Ortiz and recorded a 10th-round TKO.

The weights are a little different for this one. Wilder is five pounds heavier then what he was for the first meeting, while Ortiz is five pounds lighter. Ortiz still outweighs Wilder by 17 pounds.

There are not an awful lot of heavyweight contenders who are southpaws, so there is always the potential for such a guy to be problematic to fight. And it’s not the easiest thing in the world to get quality sparring either.

Wilder is a former Olympian, as you probably know, but Ortiz has had a world of amateur experience as well. In fact, he didn’t even turn pro until the age of 30. What we’re trying to tell you is that Ortiz is savvy enough that he knows how to exploit his left-handed-ness in order to make things awkward.

And you could see that Wilder was very tentative in the early going the first time around, holding his left hand out there essentially to maintain a distance between the two (some might call this a “range-finder”). Ortiz looked completely comfortable in there, willing to counter-punch when the situation arose. But the situation didn’t arise much. And this brought some boos from the Barclays Center crowd early as the action was sporadic. You got the impression that Wilder was just waiting to land one huge right that would change things around.

Well, he landed a big one in Round 5, followed by another right that put his man down. And Ortiz was fortunate that it came in the last fifteen seconds, or he may not have been able to survive it.

The thing is, Ortiz did not go away. Not only that, but he continued to take Wilder’s shots and came back with heavy blows of his own in Round 7 that had Wilder practically out on his feet and barely able to hang on until the three minutes were over. And in the first thirty seconds or so of Round 8, Ortiz looked like he was getting ready to finish it.

Later that round, both guys looked like they were out of gas, but they got a second wind. Ultimately, it was another big right hand from Wilder, followed by a barrage after he hurt Ortiz, that ended things in the tenth.

As BetAnySports customers have seen, Ortiz has enough skill to give Wilder a hard time. His mission would be to close the distance, get under the left hand and land something, more than likely a straight left. The danger of fighting Wilder the way he did the first time is that he puts himself in perhaps the roughest position, in that he could be out there on the end of a right hand that has a lot of leverage to it.

And you know, Wilder didn’t come with a whole lot of “repertoire” in that first fight. It was all about waiting to land that big shot. That helps us here, because I think that was all about his trouble in handling the southpaw.

What that means is that unless he’s prepared to take a lot of chances and maybe leave himself wide open early, he’ll exhibit patience. And with that comes rounds that will pass.

We know what the variables are. One (1), that either of these guys can end it if they hit the other the right way, and two (2) that Ortiz, at age 40, might show the effects of that, and bring a lot less into the encounter. Yes, if he is “shot,” he could go out quickly. But it’ll be hard to tell that until this fight unfolds. And even then, unless the guy is stumbling all over the place right away when he gets hit, it may take Wilder some time before he detects it.

So Wilder may be willing to let him get tired. That’s why, rather than go with either side, I’d “side” with the OVER. What also might be worth looking at is the two-way prop which is even money that Round 8 will start.

And by the way, here are the latest numbers on the December 7 fight in Saudi Arabia between Andy Ruiz (champion) and Anthony Joshua (champion) for the WBA-IBF-WBO-IBO titles:

We’ll talk about that when the time comes.

BetAnySports has more odds on boxing than you can get anywhere else……. Take a look at the boxing props that are available as well…… And as always, there is reduced juice and Sports Betting Ultra for more excitement with college and pro football and basketball…… Make your deposit using a debit or credit card, person-to-person transfer, or the virtual currency of Bitcoin, which is fast and easy with their automated system, and NEVER incurs a transaction fee!

And don’t forget that you can receive a 50% Welcome Bonus, available when mentioning bonus code BTB50