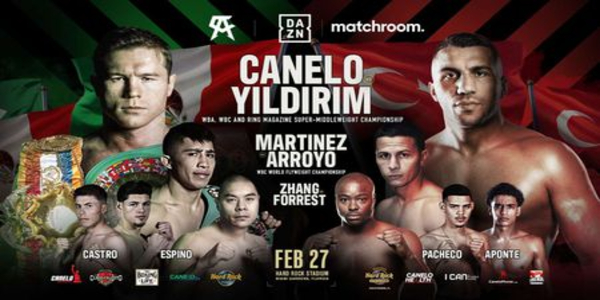 There is no bigger attraction in the sport of boxing right now than Canelo Alvarez, at least among those fighters who are truly competing at a championship level. And now he has done what some of those big attractions do – he has assumed control of his own career from a promotional standpoint.

And BetOnline customers have an opportunity to watch him in action on Saturday night as he takes on the WBC’s #1 super middleweight contender in what is known as a “mandatory defense.”

Yeah, it’s hard to keep track of which fighters own which titles these days. But currently Alvarez holds the WBC and WBA championship belts at 168 pounds, and thus the sanctioning bodies take turns as to who gets to have the commitments toward their mandatory challengers honored.

He’ll face Avni Yildirim of Turkey (21-2, 13 KO’s) in a scheduled 12-rounder that takes place at Hard Rock Stadium in Miami Gardens on Saturday night. Look for it to begin somewhere around midnight.

Because Alvarez is popular, you can’t hold his fight in an arena, with the social distancing requirements in place. At the same time, you want to have a crowd.

Alvarez has just come out of a legal action he brought against a number of parties, including Golden Boy Promotions (Oscar De La Hoya’s company), which connected him into a deal with streaming network DAZN but apparently made some arrangements on his behalf without his knowledge – namely committing him to a future fight against Gennady Golovkin – as part of a massive $360 million deal.

Canelo doesn’t seem to have a lot of desire to fight GGG again. Instead, his plan has been to accumulate belts, despite insisting that isn’t necessarily the case. But he wants to unify all the 168-pound belts, which would require subsequent fights against Billy Joe Saunders and Caleb Plant.

Here are the boxing betting odds on this fight as they are posted at BetOnline:

There would seem to be not much question as to whether Canelo is going to come out of this with a victory. The only problem I can see would be if there was some kind of unforeseen circumstance, such as Yildirim getting inside and causing an “accidental” head butt , which could end the bout in his favor if he is head after four rounds. Yildirim’s fight with Anthony Dirrell had to end and go to a technical decision (which Yildirim lost) because Dirrell got all cut up, to the extent that the doctor wouldn’t allow it to go any longer.

I mention all of this because I think it will figure into the over-under. I don’t believe Canelo wants to take a chance on an “accident” happening.

And he has a pretty ideal opponent. Yildirim doesn’t play coy. And there are no “mysteries” about him. He is just going to come toward his man, with his hands up, and stand right in front of him.

He will often let his opponent get off first, and then look to counter with something off that. And so he is there to be hit. And Canelo will land. He will land with body shots. He will land with the uppercut. And after he is hit, Yildirim loses himself a little in terms of his ability to defend himself, so Canelo will reach him with some combinations.

I would say that Yildirim is a tough cookie. And he is a legitimate super middleweight; he didn’t grow into this like Alvarez, and in fact was a light heavyweight at the outset of his career. But the difference in skill level shows itself, and if he is hit with precision punches there’s only so far he can go. Yes, the 4.5-round total is challenging, but I feel safer coming in on the “under” side of it.

There is another big promotion for this fight card, which will be shown on DAZN. The “Knockout Special” involves BetOnline’s logo, which will be seen on the ring canvas. If and when a fighter gets knocked out on that logo, you’ll get paid double on your bet, up to $100.

You’ll have to have a $5 minimum wager, and of course the winning fighter, but it is available for every fight that is shown on the card.