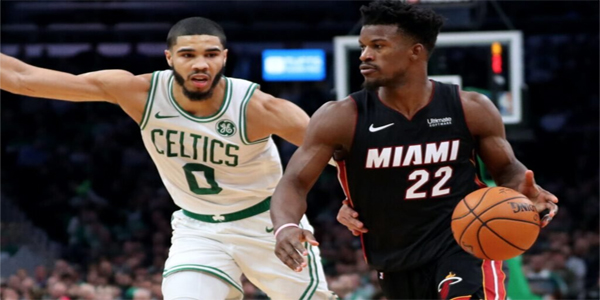 The 2022 NBA Playoffs Eastern Conference Finals wrap up Sunday, May 29, at FTX Arena in Miami, Florida, so we bring you the best Celtics vs. Heat betting pick and odds for Game 7.

According to BetDSI Sportsbook, the Celtics are small 2.5-point road favorites with a total of 195.5 points, while the Heat sit at +125 moneyline odds. Over the previous six games, both teams have covered the spread three times, and the total has gone over on four occasions.

The Celtics blew a huge opportunity in Game 6

The Boston Celtics were one win away from the 2022 NBA Finals, but they couldn’t get the job done in front of the home fans this past Friday. Playing as firm 8.5-point favorites at TD Garden, the Celtics suffered a 111-103 defeat to the Heat in Game 6.

Boston shot 44.4% from the field and 33.3% from beyond the 3-point line (11-for-33) in its most important game of the season. The Celtics didn’t play well on the defensive end either and allowed 11 offensive rebounds.

Jayson Tatum led the way for the Celtics with 30 points, nine rebounds, four assists, and a couple of steals, but he also had seven turnovers. Jaylen Brown accounted for 20 points and five dimes, Derrick White added 22 points off the bench, while Al Horford had a bad day in the office, finishing with just three points on 1-for-8 shooting from the field.

The Miami Heat have struggled mightily through Games 4 and 5, scoring only 162 points in total. Jimmy Butler has been a non-factor while struggling with a knee injury, but the six-time All-Star bounced back in style last Friday.

Butler went bonkers in Game 6 on the road, tallying 47 points on 16-for-29 shooting from the field and 11-for-11 from the charity stripe. He also had nine rebounds, eight assists, four steals, and a block while turning the ball over only once.

Kyle Lowry posted a double-double of 18 points and ten assists in Game 6. It was his best performance of the postseason by far. Tyler Herro remained on the sidelines due to a groin injury and is listed as questionable for Game 7. Herro hasn’t played since Game 3 of the Celtics series.

Game 7 between the Celtics and Heat could easily go either way, and I would stay away from it after backing Boston in each of its previous 17 showings in the 2022 NBA Playoffs. If I have to choose, the Celtics would be my pick once more, but they’ll have to slow down Jimmy Butler, who’s a key player in this Miami team.

The Celtics arguably have more dangerous weapons than the Heat, but Butler showed in Game 6 that he can beat Boston on his own. Both teams are capable of playing tough and aggressive defense, so I wouldn’t be surprised if we get a proper thriller down the stretch. If you want to take the risk, go with any team to win by five or fewer points.

The totals are another tricky bet. I haven’t seen a line this low since forever. Hereof, I lean toward the over, but the Celtics and Heat could easily provide a low-scoring affair. It’s a must-win situation, and both teams will probably prefer to play at a slow pace.

The Celtics have surpassed a 100-point mark in each but one of the previous six games of this series. They are scoring 112.0 points per 100 possessions throughout the conference finals while yielding 106.2 points in a return.