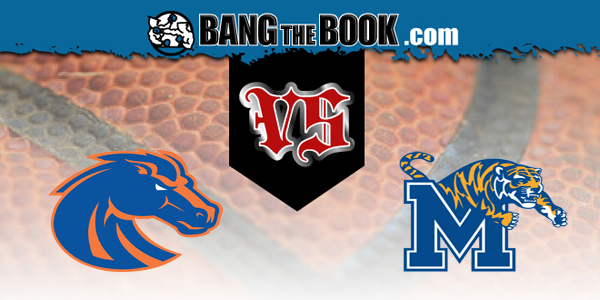 You down with NIT? Yeah, you know me.

Alright, so maybe that doesn’t work as well as OPP, and for those that don’t know what it means, I’d advise against using a work computer to Urban Dictionary it. There are four games tonight in the National Invitation Tournament in what amounts to quarterfinal action down in the Lone Star State. Our focus will be on the battle between Boise State and Memphis.

Memphis is -4 per our buddies at MyBookie Sportsbook with a total of 143. NIT lines for the quarters have been up for a little while, so these numbers have had some time to marinate and be smacked around by sharper bettors. Public players looking for something to do should come in throughout the day today.

Betting without emotion is usually the best course of action. I didn’t have any skin in the game for Boise State vs. SMU last Thursday, but I was rooting for the Broncos to beat the Mustangs. I don’t have anything against SMU, it was just sad to see how Boise State finished the regular season. The Broncos dropped four in a row and basically took themselves out of any sort of at-large consideration in the process.

The one-point win over SMU came with a major outlier. Boise State was 14-of-29 from three. This was a solid three-point shooting team during the season at 35.1%, but a team that had never made more than 12 threes in a game. It turned out that the Broncos needed each and every one of their points in that 85-84 decision. The game was played to only 70 possessions, but Boise State had 1.213 points per possession and SMU had 1.199 PPP.

Oddly enough, the 1.199 PPP allowed was the second-highest of the season for the Broncos. The worst performance came in the Mountain West Tournament loss to Nevada. We’ll see if the Broncos can get back to playing some semblance of defense here. They may need to in order to keep up with Memphis’s defensive prowess.

Boise State was a team ripe for regression as the season went along. They started 13-1 and 9-0 in conference play, but they had played several of the worst teams in the Mountain West. Their only signature win came against BYU. They had one game against a top-20 opponent and lost to Houston. They had padded their numbers against an awful schedule and went 5-6 the rest of the way in MWC play with the step up in class.

This is a major step up in class. Memphis was the highest-rated team at both KenPom and Torvik to not make the NCAA Tournament.

If there was any disappointment about not making the NCAA Tournament, we didn’t really see it from Memphis in their win over Dayton. The Tigers held yet another opponent to 60 or fewer points and scored 71 in the victory. Penny Hardaway’s crew suffered two devastating losses to Houston late in the season that could have been the signature wins needed to get into the Field of 68. Houston banked in a halfcourt three in the regular season finale and then won 76-74 in the AAC Tournament.

Memphis has a real chance at some hardware here, though not the kind of hardware that they wanted when the season began. The Tigers only have themselves to blame. They didn’t win any of their four Quadrant 1 games. They turned opponents over at a high rate, but also turned the ball over at a very high rate themselves. They were one of the five worst free throw shooting teams in the country. Only themselves to blame.

What is strange about Memphis is that the Tigers play excellent defense while playing at a high tempo. Most teams that excel defensively, and Memphis does with the #1 adjusted defensive efficiency in the country, play at a glacial pace. Memphis is 32nd in adjusted tempo. They shoot the three well and pull down lots of offensive boards, but that’s about it for good news in the offensive halfcourt.

This Memphis roster has no seniors and there aren’t any players leaving early for the NBA Draft, or at least there shouldn’t be. That means this group will be together next season and the hype train will start chugging down the tracks pretty early. It also means that Hardaway has the ability to say the right things to keep this team invested, even if it is just the NIT.

Boise State’s defense wasn’t consistently good enough this season, but it was the offensive performances in games against above average teams that really stood out. In the loss to Colorado State, Boise had .802 PPP. In the losses to Nevada, Boise had 1.071 PPP, but then just .814 PPP two days later. The Broncos had .848 and .846 in losses to San Diego State.

Above average teams shut Boise down offensively and the Broncos defense wasn’t good enough to overcome it. Doesn’t this game seem to set up the same way? Memphis has a tremendous defense and they seem invested enough in playing a lot of it like they did all season long.

It’ll be Memphis for me, as the Tigers should advance and take care of business.