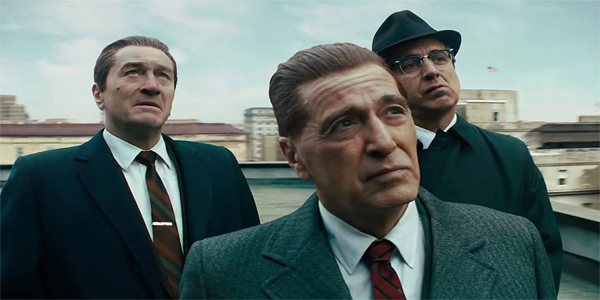 You know, Robert DeNiro got stiffed by the Motion Picture Academy. Al Pacino and Joe Pesci may cancel each other out. And Martin Scorsese? Well, he just ain’t gettin’ enough respect, ‘ya know what I’m sayin’?

So you’ve got to wonder, will “The Irishman” get completely shut out at the Oscars on Sunday night? Maybe there should be a prop on that. There isn’t. But we can tell you this much – at BetAnySports, there isn’t an over/under on how many Oscars it will win, perhaps since not much is expected.

Here are the prices on “The Irishman” to win the various categories:

* There is also a combo prop at BetAnySports – for either Pacino or Pesci to win Best Supporting Actor, the price is +1375.

That’s a lot of nominations – ten in all. And those are a lot of longshot prices.

I’m a little surprised there are such long odds on Martin Scorsese (+4975) and I’ll tell you why – “The Irishman” may wind up being his last “great” film (though I was not blown away by it) and there was an incredible amount of coordination that had to be done with the visual effects; i.e., those effects that made the principal actors like Robert DeNiro, Al Pacino and Joe Pesci look younger in scenes that flashed back in time. Mostly it took an amount of patience on his part that is probably very unusual for a director.

Apparently the computer-generated “de-aging” process was something that inflated the budget of this film to a figure that has been reported to be $159 million. And when you’ve got a movie that drew just $8 million in its limited box office run, that leaves Netflix, which bankrolled the whole thing, on the hook for a lot of dollars. I don’t know why they just didn’t save money by putting a lot of spackle on the actors and drape some gauze over the camera lens (a Warren Beatty trick, I’m told). I kid, I kid.

Can I confess to a sentimental favorite? Joe Pesci, who has been nominated twice before in Scorsese pictures (winning for “Goodfellas” but not for “Raging Bull”) is from my neighborhood and was a friend of the family. He even used to cut my hair when I was a little kid (I’m not kidding). Despite whatever flaws “The Irishman” may have had, including whether the story was actually true or not, everyone agrees that his work as Scranton-based mob boss Russell Buffalino was brilliant. If there is an upset in the Supporting Actor category (where Brad Pitt is a -3380 favorite), maybe it’s him. Pesci is priced at +2045 at BetAnySports.

DeNiro got stiffed altogether by the Academy, shut out of a nomination for Best Actor. His Golden Globe snub was a harbinger of things to come.

But if there’s a category where “Irishman” fans might get some satisfaction, it’s in Visual Effects. Lord knows they were expensive enough. And putting together the whole package was complicated to the point where I can’t even explain how they did it, except to say that they had to have a three-camera rig and work on every frame, one at a time, to achieve what they wanted. And even then it wasn’t 100% perfect.

Will there be an “A” for effort, though?

Officially, the nominees in this category are Pablo Helman, Leandro Estebecorena, Nelson Sepulveda-Fauser, and Stephane Grabli. The company principally responsible for the visual effects is Industrial Light & Magic, through their “Flux” software.

Unfortunately, “The Irishman” didn’t rate the favorite’s designation in this category from BetAnySports. Here are the numbers:

So there you have it – only fourth on that list. An uphill battle for certain.

Hey – you may be angered by all of this, but please don’t do the same thing DeNiro’s character did to Joey Gallo.

You know what I’m talkin’ about.

At BetAnySports, you can wager on each and every Oscar category, not to mention a healthy number of propositions……..You can make your deposit using a debit/credit card, person-to-person transfer or the virtual currency of Bitcoin, where there are NO transaction fees…….Place some bets, then settle back and see if they win. Maybe that’s the perfect way to stay awake through the long telecast. Hey, you watched the Super Bowl for four hours, didn’t you?