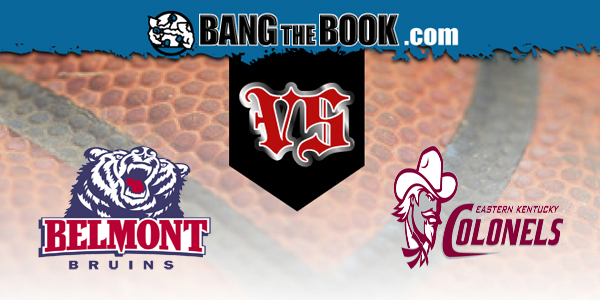 It is Thursday and we’ve got a lot of college basketball games on the betting board as teams head into the stretch run of the regular season. Unfortunately, we’re looking for a bounce back as DePaul was not competitive at all against Creighton last night in a 24-point loss.

That leaves us at 2-1 for the week going into the 25th, as we take a look at the spotlight game between Belmont and Eastern Kentucky. The Bruins are favored by 7.5 on the road with a total of 160.5 per the folks over at Bovada Sportsbook.

This will feel a bit like déjà vu as far as spotlight game previews are concerned. This was a game that we highlighted back on February 11. It was played in Nashville and Belmont was favored by 11.5 with a total of 159.5. Not much has really changed except the venue as it appears that the only difference in the line is home court advantage.

What also hasn’t changed for Belmont is that the Bruins are still undefeated in conference play. Belmont’s lone loss came in a 96-83 game against Samford back on December 5. They’ve won 21 straight since, including 18 league games in the OVC. They’ll have road games against Eastern Kentucky and Morehead State in hopes of entering the OVC Tournament unblemished.

In the first meeting between these two teams, Belmont had a lot of success on offense with 1.166 points per possession on a 33-of-63 night from the floor. The Bruins racked up 92 points and the game went over the total. As far as conference play goes, that was a middle-of-the-pack type of performance in the offensive halfcourt for Belmont.

This is a team that leads the conference in 2P% at 62.7% and is third in 3P% at 36.4%. They’ll run if you want them to, as they rank third in adjusted tempo as far as OVC teams go. Belmont has been a solid defensive team in the league as well, holding opponents to a 45.4% mark on two-point shots with the conference’s second-best eFG% defense.

Since that Belmont loss, Eastern Kentucky has won four of five. The lone loss came against SEMO State in a 94-72 shellacking. The Colonels allowed 1.223 PPP in that game as SEMO State just couldn’t miss. The 14 treys made by the home team in that game were the most all season by far. Eastern Kentucky got revenge two days later with a 22-point win of their own.

This Eastern Kentucky team is a good one and a young one. Most of the standout players are underclassmen with the exception of a few juniors, so this may be a measuring stick game for next season based on how EKU has performed this year. The Colonels are third in adjusted tempo overall and has been pretty efficient offensively with a 51.3% eFG% that ranks 103rd in the nation.

In league play, specifically, EKU wins the turnover battle most nights. They are second in TO% on offense and first in TO% on defense. They are also the best team in the conference at shooting threes with a 38.8% clip. They are also 11th in 2P% at 49%, so that will be an area of the team that needs some attention on the recruiting trail and in the transfer portal for an up-and-coming head coach in A.W. Hamilton.

The first Belmont/EKU was played to 79 possessions, the fastest regulation game in conference play for Eastern Kentucky up to that point. They repeated it again the next game against Tennessee State. Belmont started extremely fast and never really let up, so free throws never even became a big part of the equation with 27 total attempts between the two teams.

Belmont has Morehead State on deck with what they expect to be a perfect OVC record in tact, so I do worry about a little bit of a look-ahead factor here, but in the first game, it was such a blowout that both teams emptied the benches. Belmont star Nick Muszynski only played 23 minutes. EKU’s top guys were all under 30.

I’m looking for points again tonight. Belmont scored 92 the first time and will expect to be able to outscore EKU to victory again here. The total only adjusted one point. Typically blowouts are good for unders, but the first game still went over. I’m expecting a closer game here, but an over all the same.