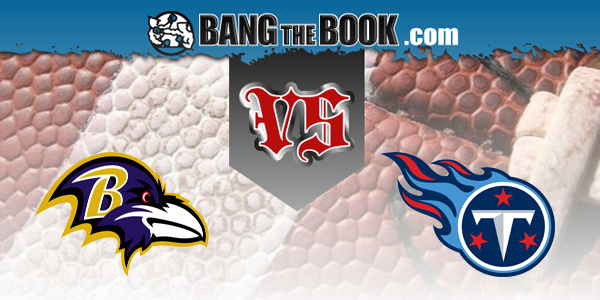 When the Baltimore Ravens and Tennessee Titans met in last year’s playoffs, the outcome was surprising. Baltimore was favored at some places by double digits and never came close to covering in a 28-12 loss. The Titans, one of the hottest teams in the NFL going into the postseason, wound up stopped by the Kansas City Chiefs the following weekend, but not after beating the Ravens to get to the AFC Championship Game.

Baltimore’s shot at revenge comes now. Sure, the two teams played in the regular season, a game Tennessee won in overtime, but the Ravens certainly wanted this spot in the postseason and now they’ve got it against the AFC South champs.

Baltimore is -3.5 with reduced juice at MyBookie Sportsbook with a total of 54.5 for the matchup in Nashville on Sunday in the 1:05 p.m. ET time slot.

We’ll take a look at this game from all sides and find a play on the game.

Early money has been on Tennessee and we even saw this game drop to -3 on Thursday for a while before getting bet back up to 3.5 at a few places around the market. The Ravens were put behind the eight-ball a bit last season for the playoff game. They rested most of their starters in Week 17 and then earned one of the two playoff bye weeks. As a result, they looked rusted and disjointed against a team that was setting the world on fire.

Baltimore outgained Tennessee 530-300 in that game, but also had the game’s only three turnovers and went 0-for-4 on fourth down. This season, it is the Ravens with five straight wins and covers and a Tennessee team that has had issues against the Texans, Browns, and Packers in recent weeks, including the need for a game-winning field goal to win the division in Week 17 as a 7.5-point favorite.

The Titans really shut Lamar Jackson down back in Week 11. Since then, Jackson has an 11/3 TD/INT ratio with 56 carries for 430 yards in wins over Dallas, Cleveland, Jacksonville, the Giants, and Cincinnati. That isn’t exactly a murderer’s row of opponents, but at least the offense is humming with some measure of efficiency going into this one.

Jackson is 0-2 in the playoffs with the Ravens. He’s got a 3/3 TD/INT ratio and has only completed 51% of his passes. He’s been sacked 11 times, including four in last year’s game against the Titans. He did accumulate 365 passing yards and 143 rushing yards in the losing effort.

The Ravens defense will be under siege here from a Tennessee offense that has all sorts of ways to create points. The Titans had 6.2 yards per play in the regular season meeting compared to 4.9 for the Ravens. Derrick Henry had 28 carries for 133 in that game and Ryan Tannehill threw for 259 yards.

Points were left on the field by both teams, as nine red zone trips only accounted for three touchdowns. The Titans were 2-of-5, which was not the case in most of their games. The Titans scored six on 48 of 64 red zone trips and a 75% success rate was second only to the Packers. The Ravens, meanwhile, ranked 12th.

The Titans have to outscore opponents. It’s a pretty simple formula. The defense is bad. The Titans have the league’s worst third-down defense, as opponents have converted just under 52% of their “Money Down” attempts. The red zone defense was the third-worst in the NFL. That will be the question for Tennessee here. How many points can they score on the Baltimore defense?

Tannehill completed over 65% of his throws with a 33/7 TD/INT ratio. Henry won the rushing “Triple Crown” with 2,027 yards and 17 touchdowns while leading the league in attempts with 378.

This is the highest variance game of the first round. If the Ravens lose the turnover battle, they are going to lose the game. They have to maximize their possessions while not giving extra ones to this potent Titans offense. And then they have to hope to stop a Titans team that scored 2.87 points per drive this season.

These are also two well-coached teams. John Harbaugh’s playoff success has been limited lately, but he’s still widely regarded as an excellent head coach. Mike Vrabel has certainly carved out a large amount of respect as well.

Ultimately, I’ll take the better defense in the Ravens. There is a reason why the Titans have all of this firepower and a highly public profile and are still a 3.5-point underdog at home. I think the line says a lot here and it says Baltimore is the side. There are some 3s out there if you want to lay -125 and that’s better than 3.5 at reduced juice.