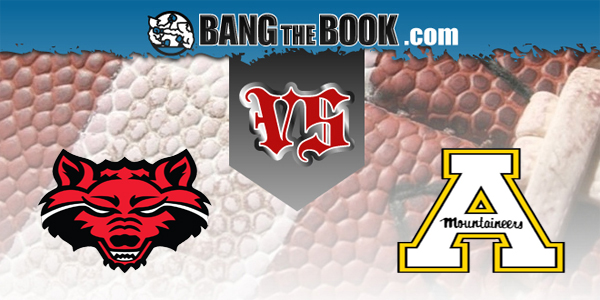 It is a quiet night in the sports world on October 22. The World Series takes a break and with only two football games on the card, bettors are going to flock to those standalone contests. We’ve got two different viewpoints on Giants vs. Eagles for your reading pleasure here and here.

Now let’s take a look at the Week 8 lid-lifter in college football between Arkansas State and Appalachian State. Per our friends over at Bookmaker, App State has been bet up to a 13.5-point favorite with a high total of 68. This is only the seventh time as an FBS member that App State has had a total higher than 65 in one of its games. The under is 4-1-1.

We’ll break this one down from both sides and see if we can find a play on the Thursday Nighter.

With regards to the total, it is worth pointing out that Arkansas State is one of the fastest teams in the country from a tempo standpoint. They ran 96 plays in last week’s barnburner and offensive showcase against Georgia State in the 59-52 win with a total of 73. That win moved Arkansas State to 3-2 straight up and 4-1 against the number. They are also 4-1 to the over.

The two-quarterback rotation for Arkansas State has served the Red Wolves well. Logan Bonner is 76-of-119 for 938 yards with 11 touchdowns against three interceptions. Layne Hatcher is 62-of-98 for 896 yards with a 10/1 TD/INT ratio. Both guys have been sacked seven times, so Arkansas State has had some protection concerns through five games, but they’ve mostly been moving forward.

Arkansas State is third in number of plays among teams that have played five games so far this season. They’ve averaged 6.44 yards per play. On the defensive side, they’ve allowed just over six yards per play.

The running game stats have been dragged down by two quarterbacks that lack mobility, but primary rusher Jamal Jones only has 4.4 yards per pop on his 58 tries. That could mean more carries down the line for Lincoln Pare, who has 30 rushes for 179 yards.

Early-down success will be a big deal for Arkansas State here. They rank 50th out of 77 teams in third-down conversion rate at 38.96%. Their opponents rank seventh, but they only have 35 third-down attempts.

You cannot handicap this game without considering the long layoff for the Mountaineers. The reason why they only have 35 third-down attempts is because this will be just the fourth game of the season for Appalachian State. They haven’t played in 26 days. Meanwhile, this is the fourth game in 19 days for the Red Wolves, who have been able to stay sharp.

App State has a new head coach this season in Shawn Clark, who was the interim head coach for last season’s New Orleans Bowl triumph over UAB. The Mountaineers lost on the road at Marshall as a 6.5-point favorite, but do have wins over Charlotte and Campbell. What they don’t have to this point is an ATS win, failing to cover -17, -6.5, and -35.5. App State has averaged 6.4 yards per play in those three games.

As always, the Mountaineers have a strong rushing attack behind a stable of backs that includes Daetrich Harrington and Camerun Peoples. To this point, App State has averaged 5.7 yards per carry as a team. Thomas is more mobile than the Arkansas State options, but he only has two touchdown passes against two interceptions to this point. In fairness, top wide receiver Corey Sutton opted out of the season. Thomas Hennigan has picked up the load, but Sutton was the big play guy and led the team with seven receiving scores last season.

Defensively, the Mountaineers have allowed 5.15 yards per play. They gave up 5.41 yards per play to Marshall in the 17-7 loss in Huntington. This game will be about App State’s ability to keep the play in front of them. Arkansas State has 85 plays of 10+ yards and 10 plays of 40+ yards, so they move it in chunks. Generally speaking, App State has been great at that, allowing fewer than five yards per play on average over the last four seasons.

My favorite pick here is Arkansas State +7.5 in the first half at Bookmaker Sportsbook. Arkansas State plays at a breakneck pace. It may take some time for App State to get up to game speed after 26 days off and after playing Campbell in the most recent game. The Mountaineers also played a very deliberate Marshall offense.

As far as a full-game lean, let’s see if we get a full 14 on Arkansas State. Public bettors will bet the team they know and that is Appalachian State in this standalone spotlight game. If Arkansas State gets to 14, I’ll likely have a piece. For now, +7.5 first half is the play.

GET A 100% CASH WELCOME BONUS AT BOOKMAKER SPORTSBOOK!