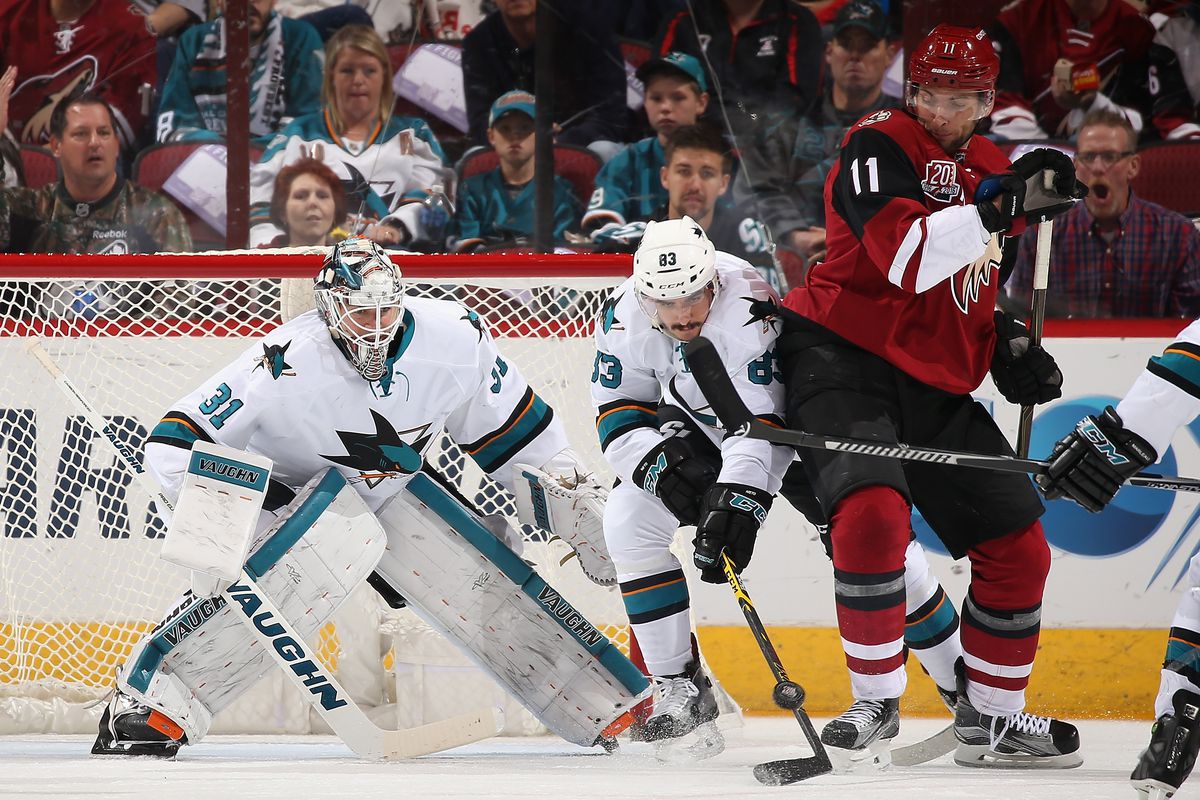 Nobody seems to want the final playoff spot in the NHL’s West Division. The Vegas Golden Knights, Colorado Avalanche, and Minnesota Wild have all already punched their respective tickets to the postseason. The St. Louis Blues, Arizona Coyotes, San Jose Sharks, and Los Angeles Kings are separated by six points top to bottom in the division for the fourth and final spot.

The Blues are suffering through a difficult portion of the season and have another tough game against the Wild tonight. A big four-point game takes place between the Coyotes and Sharks tonight and that will be the spotlight game for this preview. The game is lined -110 both ways at Bookmaker Sportsbook with a total of 5.5.

With a win and a St. Louis loss, the Coyotes would leapfrog into the fourth spot. If the Sharks get the two points and a Blues loss, they’ll close the gap to three with seven games left.

Arizona has lost eight of its last 10. The door was open with the extreme strength of schedule difficulty for the Blues, but the Coyotes have left the door swinging in the breeze and have not walked through it. They are now -24 in goal differential on the season with the recent struggles and dropped a 6-4 decision to the Sharks on Monday in their most recent game.

Only two of the eight most recent losses have come in one-goal games, so the Coyotes haven’t even been competitive enough most nights. That 6-4 loss was the first regulation loss for the ‘Yotes in the season series, as they are 3-1-1 against the Sharks on the campaign.

The problems run deep for the Coyotes, as they can’t score enough goals at even strength and haven’t gotten very good goaltending. We’ll see if Darcy Kuemper can bounce back from his poor showing on Monday. On the heels of a shutout win over the Kings, Kuemper allowed four goals on just 11 shots and was pulled early in the second period. For the season, Kuemper has a 2.52 GAA with a .907 SV%, which simply isn’t going to get it done with the limited margin for error provided by the offense.

That means Kuemper will absolutely have to play better for Arizona to secure two points here. If it isn’t Kuemper, the onus will fall on Adin Hill, who stopped 21 of 22 shots in relief of the starter on Monday. Hill has not started since April 11 and has a 2.84 GAA and a .911 SV%.

Monday’s win broke an eight-game losing streak for the Sharks, who are not dead yet in terms of the playoff picture. The task at hand is made a lot more difficult with four games left against Colorado and then a season finale against Vegas. Every game is a must-win when chasing a playoff spot, but this one very much falls into that category with a team ahead of San Jose in the standings.

Goaltending has been an enormous issue for the Sharks. Collectively, Martin Jones, Devin Dubnyk, Josef Korenar, and Alexei Melnichuk have combined to post a 3.42 GAA and an .896 SV%. Those are putrid numbers. None of the three goaltenders to appear in at least six games have a SV% of .900 or better. Melnichuk stopped all five shots that he faced in his nine-minute relief appearance.

It will be Korenar tonight for the Sharks, who has allowed 14 goals on 119 shots in his six games. The 23-year-old scored his first NHL win in that 6-4 decision on Monday. The Sharks haven’t gotten saves in big spots. Their high-danger save percentage is the lowest in the league at 78.48% at 5-v-5. Goaltending will be a focal point this offseason to be sure.

Along with the lowest HDSV% in the NHL, the Sharks are 29th in high-danger shooting percentage at 5-v-5. Think of that stat like performing with runners in scoring position in baseball. The best chances to score and the best chances for the opposition to score often dictate a game. For the Sharks, they’ve failed in both areas. If the season were to drag on a little longer, maybe some positive regression would come, but it’s hard to see a wild swing with so little time left.

The Sharks should be a better team than they are. The season has been a tumultuous one for them. Because of COVID-19 protocols in Santa Clara County, they weren’t able to play a legit home game until February 13. They played their first 12 games on the road. Six of their remaining eight games are at home, with only one more road trip, a visit to Denver.

The over has to be a consideration again here. We saw 10 goals on Monday and we could see another high total tonight. Korenar is an unproven commodity and the Sharks have gotten poor goaltending all season long as it is. Neither Coyotes goaltender stands out and Kuemper has been very poor in road games this season.

The over 5.5 is a decent bet, but the Sharks at -110 looks pretty good as well. While Arizona has done well against San Jose, the Sharks have a statistical profile that looks a little bit sharper and the end of that eight-game skid should breathe some life into San Jose.