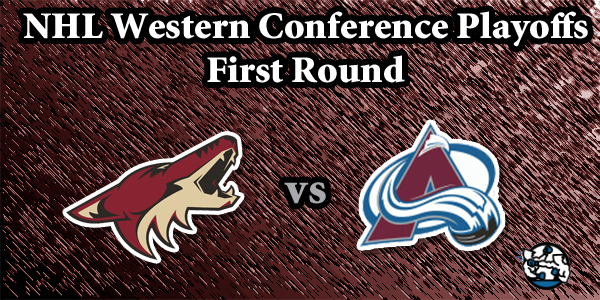 This isn’t quite a David vs. Goliath matchup, but there are a lot of people that like a healthy Colorado Avalanche team to win it all this postseason. The Arizona Coyotes are hoping that will not be the case and that they can pull the first round upset, but they are the underdog with the second-longest odds on the board to advance.

Stranger things have certainly happened and the Coyotes played very well in advancing past the higher-seeded Nashville Predators, but they do have a real uphill battle in this series.

There are a lot of afternoon starts in this series given that it will be played in Edmonton, but these teams in the bubble don’t have the same concept of time as they would during a traditional postseason. It is interesting that Game 2 and Game 3 are a back-to-back, but these teams have been instructed to expect the unexpected with game times and whatnot in these playoffs anyways.

Arizona scored 10 goals 5-v-5 against Nashville in the first round. They’ll face a Colorado team that was +47 in 5-v-5 goal differential here in the first round. Arizona was a stingy defensive team at even strength during the regular season, but a lack of offense was one of their biggest problems over the course of the year.

Arizona only scored 128 goals 5-v-5. That isn’t necessarily a death blow. After all, they advanced to this round. Dallas and Columbus, who both scored fewer 5-v-5 goals than Arizona, are also in this round. Dallas was even one of the top four seeds. It just means that the Coyotes have a smaller margin for error than some of the other teams in the first round. They’ll have to rely heavily on Darcy Kuemper to make saves and also cash in on their offensive opportunities.

The concern for Arizona is that their Qualifying Round win may have been solely about the goaltending. The Predators got an 82.22% SV% on scoring chances. Arizona got a 91.23% SV%. The Predators had 103 scoring chances to Arizona’s 82 in the series, but the Coyotes cashed in on their chances and Nashville did not. Against a better team like Colorado, Kuemper’s importance is magnified that much because the Coyotes are likely to get beaten even more soundly in some of the advanced metrics.

Kuemper was great in the regular season. He posted a .928 SV% with a 2.22 GAA. He had a 16.65 goals saved above average mark. Goaltending was going to be the big gap in that series against the Predators and it came to fruition. Kuemper had an excellent regular season and he’ll have to be outstanding here, otherwise this could be a quick series.

The Avalanche battled all sorts of injuries throughout the season, as guys like Cale Makar and Mikko Rantanen missed some games. Gabriel Landeskog also missed 16 games. A full-strength Colorado team is one of the most dangerous in the NHL. They made some savvy moves at the Trade Deadline to infuse some more depth and talent into the roster.

Also, Jared Bednar can flat out coach. Bednar was the bench boss when the Lake Erie Monsters won the Calder Cup back in 2016. Bednar has also done a fabulous job taking a bottom-feeder Avalanche team and elevating it to where they are now. Colorado ranked fifth in Scoring Chances For%, as they ranked sixth in scoring chances for and eighth in scoring chances against. They didn’t get enough high-danger chances in the regular season, but they were also doing a lot of line shuffling.

Colorado’s power play could have been better and the two teams graded out pretty evenly in special teams. The Avs could also have some questions in net. Philipp Grubauer played well during the regular season, but Pavel Francouz was better. Francouz also had a shutout in his only Round Robin game. Grubauer will get the first crack, but he was replaced two years ago by Braden Holtby for Washington’s Stanley Cup run when he struggled. He has some playoff questions to answer.

The Avalanche are just too good of a team at full strength. Nashville had all sorts of chances against Kuemper and the Coyotes, but just couldn’t finish them. If Nashville, a marginal offensive team during the regular season, had that much success against Arizona’s defense, what are the Avs going to do?

Colorado allowed the third-fewest 5-v-5 goals during the regular season and Arizona was seventh, so maybe this winds up being a lower-scoring series for those that are looking to bet some totals.

ALL IN ON THE AVALANCHE IN THE FIRST ROUND AT BOL!