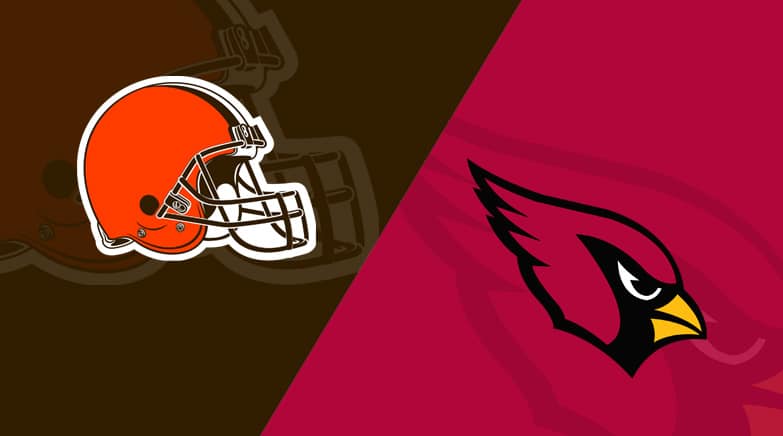 The Arizona Cardinals are the only undefeated team heading into Week 6 of the 2021 NFL season. They’ll try to stay on the winning path Sunday, October 17, when they face off against the 3-2 Cleveland Browns at FirstEnergy Stadium in Cleveland, so we bring you the best Cardinals vs. Browns betting pick and odds.

According to MyBookie Sportsbook, the Browns are 3-point favorites with a total of 49.5 points. They are winless in four straight meetings with the Cardinals, as these two non-conference foes take on each other for the first time since 2019.

The Cardinals shut down the Niners for their fifth straight W

The Arizona Cardinals (5-0; 4-1 ATS) extended their winning streak last Sunday, outlasting the San Francisco 49ers as 6-point home favorites, 17-10. The Cardinals allowed 152 rushing yards (5.4 per carry), but their defense was at the highest level when it mattered the most, allowing the Niners to convert only three of their 11 3rd downs.

Kyler Murray struggled with a shoulder injury and still threw for 239 yards and a touchdown, completing 22 of his 31 passing attempts. DeAndre Hopkins had some big catches and finished with six receptions for 87 yards and a TD, while James Conner added ten totes for 29 yards and a TD.

Arizona owns the fourth-highest scoring offense in the NFL, averaging 31.4 points per game. The Cardinals are yielding just 19.0 points in a return (6th in the league) on 139.0 rushing yards (28th) and 214.4 passing yards per game (8th).

The Browns suffered a tough loss in Week 5

The Cleveland Browns (3-2; 3-2 ATS) put an end to their three-game winning streak last Sunday. They suffered a tough 47-42 defeat as 2.5-point road dogs at the LA Chargers, blowing a 14-point third-quarter lead and surrendering a couple of touchdowns in the final four minutes and 45 seconds of the game.

The Browns couldn’t cope with the Chargers’ fluid offense, allowing Justin Herbert to throw for 398 yards and four touchdowns. Cleveland racked up 531 total yards and ran 35 times for 230 yards, but it just wasn’t enough. Nick Chubb led the way with 21 carries for 161 yards and a TD, while Baker Mayfield went 23-of-32 for 305 yards and a pair of scores.

Cleveland leads the NFL in rushing yards per game (187.6), as Chubb and Kareem Hunt continue to torture their opponents. The Browns are tallying 28.4 points per contest (tied-6th in the league) while surrendering 22.8 points in a return (11th) on 298.8 total yards (4th).

The Cardinals’ run D is probably their weakest link, so I’m expecting the Browns to hand Arizona its first loss in 2021. Cleveland’s ground game is the best in the NFL thanks to a stout offensive line and a tremendous RB duo.

Back in Week 2, the Cardinals allowed 177 rushing yards to Minnesota, while the Jacksonville Jaguars racked up 159 rushing yards against Arizona in Week 4. Of course, the Browns’ defense will have to regroup after yielding 47 points at the Chargers. In its last two showings at home, Cleveland has allowed only 13 points in total.

Eight of Arizona’s last nine road games went in the under. The Cardinals haven’t allowed more than 20 points over their previous four outings away from home. On the other side, I’ve mentioned the Browns’ last two home contests, though the over is 3-2 in their five outings in 2021.

The totals look like a tricky wager, so I would stick with the Browns to win straight up. Cleveland should roll over the Cardinals’ run D, but the visitors certainly possess enough firepower to score a few touchdowns, especially through the air.