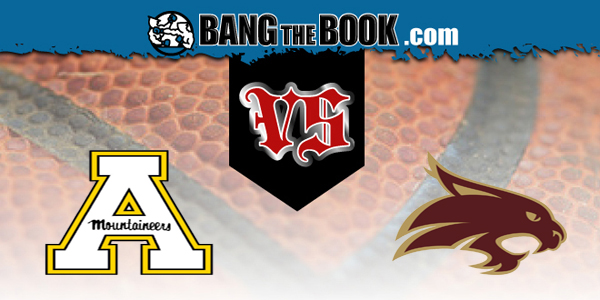 Colorado State and Nevada flew over the total after a slow start on Friday to bring this week’s record up to a solid 4-1 on the spotlight games. We’ve got a bunch of games on the betting board for Saturday and we’ll see the start of more conference tournaments and even see some tickets punched for the Big Dance.

As always, our focus will be on a late game to give the article lots of lead time. Tonight, we’ll be focused on the quarterfinals game in the Sun Belt Conference Tournament between Appalachian State and Texas State. Texas State is -3.5 at Bookmaker Sportsbook with a total of 122.5.

There are some unique elements to this game that we’ll talk about throughout the preview.

App State went into the SBC Tournament as the #4 seed from the East Division. A 67-60 win over Little Rock sent the Mountaineers into this quarterfinal game with Texas State. One of the quirks about this conference tournament is that the games are played at two locations in Pensacola, Florida. App State was victorious last night at Pensacola State College.

The Mountaineers will play in the much larger Pensacola Bay Center in this one against the top team in the conference. App State was 12-of-30 on three-pointers last night in the smaller venue en route to that 67-60 win. This is an Appalachian State team that had lost six of its last seven in the regular season and the only win came in double overtime against Georgia Southern.

The 30 three-pointers were a lot for App State. The Mountaineers outscored Little Rock by 24 on threes and went just 10-of-23 on two-point shots. App State does shoot a lot of threes, though. Their 3P Rate of 43.7% ranks 40th nationally. They only shoot 31.7% on threes overall, so last night’s 40% was a little bit out of character for App State.

The Bobcats could enter tonight’s game with some nerves. They’ll be starting their conference tournament run with some high expectations as the highest-rated team in the conference. They wound up as the #1 seed in the West Division, but would have been the overall #1 with a 12-3 record anyway. The offensive profile for the Bobcats is pretty interesting. They are sixth in the nation in 3P% at 39.5%, but 342nd in the nation in 3P Rate, as just 26.7% of their shots have been from beyond the arc.

In 15 league games, Texas State wound up posting the best defense in efficiency, TO%, and ORB% against. Opponents did shoot the three fairly well against them at 34.8%, but only made 47% of their two-point attempts. Texas State plays something of a higher-variance style because they also turn the ball over a lot on offense, so this could be a game in which App State gets some extra possessions.

Texas State went 8-3 in games decided by six or fewer points. The Bobcats play at one of the absolute slowest tempos in college basketball, which makes it hard to get margin in a lot of games, especially with such a low rate of three-point shots.

While the offense is pretty middle of the road, the defense is easily the best in the Sun Belt. This is the first season for head coach Terrence Johnson, who took over for Danny Kaspar, who resigned amid some concerning allegations about using racially insensitive language. It was a tough start to the season for Texas State, one that included a loss to Our Lady of the Lake, but they’ve won 12 of 15 in Sun Belt play.

This is going to be a much different shooting backdrop for an App State team that lives on the three-point shot offensively. Texas State has forced a lot of turnovers, so they could force App State into more than normal. On the other hand, there is a chance that App State picks up some extra possessions and if they shoot well from deep, then an upset is coming.

I’d rather take the better defensive team here in a game that will be played in a large venue that neither team is familiar with. App State did win yesterday, but had an out-of-body shooting performance and beat a Little Rock team that hasn’t been fully invested for a while now. Texas State is good at the free throw line if this game becomes a foul fest late.