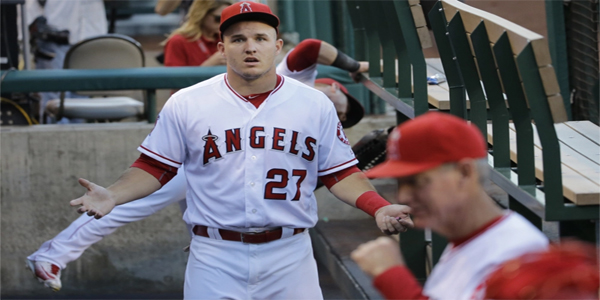 The AL MVP chase is going to be fascinating. Why? Because Mike Trout has such a short price according to the odds at 5Dimes Sportsbook. That means we have a ton of really good players to pick from at very reasonable prices. The departure of Mookie Betts actually made Trout a -125 favorite with everybody else at +1000 or higher. This seems too good to be true.

Sure, Trout has won the award three times already, but it seems like writers sort of get bored with how good he actually is. I’m not sure how that’s possible, but it does feel like the writers try to reward other guys whenever they can.

With that in mind, that creates a whole lot of value in a lot of different ways. It is also nice that unlike the NL MVP, which wasn’t posted at 5Dimes at time of writing for some reason, we can go back to the 5Dimes odds, where there are a lot more players listed. For what it’s worth, the AL MVP odds came from BetOnline Sportsbook.

There are a lot of really good players with double-digit prices because Trout is lined so low and some of those 10/1 to 20/1 prices are really worth extended looks. I do think that a guy like Alex Bregman, who was the runner-up last season, will be hurt by the sign stealing scandal, so I will be shying away from all of the Astros that are listed…except for one.

I will also shy away from guys like Aaron Judge, Shohei Ohtani, and Giancarlo Stanton. Health isn’t as important as it has been in the past, but players need time to put up those counting numbers that the old-school members of the electorate need to see. Trout and Betts each played less than 140 games the last two seasons, but they had the numbers regardless. That just isn’t something that I would want to bet on.

There are also a lot of guys that we can remove that are good hitters that put up great numbers, but elite numbers are required to win the MVP. Each of the last four awards has gone to a guy with an OBP over .400. Four of the last seven and five of the last eight to hitters have gone to guys with a SLG over .600. Only four qualified hitters did that last season. Only seven hitters had an OBP over .400.

The risk is there to take somebody like Anthony Rendon because he could split votes with Trout, but at +2500, he is hard to pass up. Rendon was one of the seven hitters that had an OBP over .400 last season. He fell just shy of that .600 SLG mark at .598, but he hit 34 home runs, played excellent defense, and could be the missing piece for an Angels playoff run. If Rendon is the guy that helps put the Angels over the top and back into the playoffs, he has a real legitimate chance to steal the award from his teammate. The 25/1 price certainly takes into account Trout’s presence, but if you look at Rendon’s numbers from last season, he fits the bill as a guy capable of winning the MVP.

Yordan Alvarez did not have enough plate appearances to qualify, but he had the numbers. Over 369 plate appearances, Alvarez slashed .313/.412/.655 with stupid power. He hit 50 home runs in 622 plate appearances between Triple-A and the Major Leagues. He is a guy that the voters can excuse from the sign stealing scandal because he was playing in A-ball and had no involvement whatsoever.

If the Astros have a huge season offensively, and they probably will, it will be hard to shut them out completely. The easy default is to Alvarez, who should have the power, should have the OBP, and should have all of the counting stats. At 100/1, this price is ridiculous. The value here is astonishing, to be totally honest with you. That is absolutely my favorite bet of the AL MVP odds.

To be honest, at the prices, those are the only two guys I would consider. If Judge was healthier, 10/1 on him is a great gamble with that bandbox in the Bronx. If the baseball plays differently, Yankees hitters won’t be as affected.

Nelson Cruz is kind of fun at 300/1, but the last DH “type” to win was Barry Bonds and he was putting up obscene numbers. Albert Pujols won twice in the NL, but he was still a first baseman at that point.

There are a lot of very good players on this list, but the pickings are slimmer than you would think.