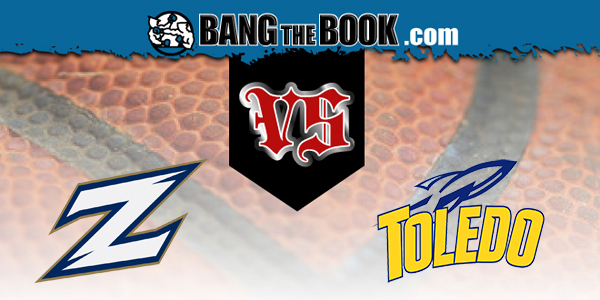 You miss 100% of the shots you don’t take. I wish I hadn’t taken a shot last night on UCF against Memphis. The Knights were blown out to start the week on a sour note, but today is a new day with a new card full of college basketball games to choose from.

There are some really excellent games on the betting board for tonight. Hopefully Texas is back at full strength against Baylor. Illinois should get a stiff road test at Indiana. Tennessee and Ole Miss is a good one.

Our focus, however, will be on the MAC where a big game between the top two teams takes place at the Savage Arena on the University of Toledo campus featuring the Akron Zips and the host Toledo Rockets. Money has hit the board on the visitors, as the line sits at 5.5 at MyBookie Sportsbook with a total of 149.

These are two terrific teams. Combined, they have a record of 18-3 in MAC play. Akron drew first blood in the season series with a 95-94 overtime win at the JAR in the Rubber City back on January 16. This is the rematch game and we should see a third matchup with a NCAA Tournament berth on the line next month.

Since that win, Akron has been riding a “rocket” to the moon in the MAC. The Zips have reeled off six in a row, five straight in lopsided fashion since that Toledo victory. Akron has won by 12, 14, 11, 21, and 28 over the last five matchups against lesser teams in the conference.

There is a lot to like about this Zips squad. The only clear shortcoming is that they rank 302nd in the nation in TO%. Otherwise, they rank 43rd in eFG% on offense and 51st on defense. They’ve shot the ball extremely well inside the three-point line, posting a 57.7% mark on two-point shots and a 76.1% mark at the free throw line. Interestingly, though, Akron actually takes a ton of three-pointers.

The Zips are fifth in the nation in 3P Rate at 50.5%. They’ve only shot 33.5% on those triple tries. Akron is shooting 35.2% of those in conference play, though, so they have improved as the season has gone along. That includes a 14-of-40 performance from deep against Toledo in that early-season win. That was a 95-94 game played to just 73 possessions with an overtime period. Akron scored 1.277 points per possession and Toledo scored 1.279. The game went to overtime at 83-83.

CLAIM YOUR WELCOME BONUS + A FREE FUTURES BET AT MYBOOKIE

I don’t think any major conference team would want to face either of these squads in March Madness, but especially not Toledo. The Rockets do just about everything well on the offensive side. Like Akron, Toledo has no qualms about bombing away from anywhere. Their 3P Rate is 44.9%, which ranks 33rd in the nation. The difference is that they’ve hit 38.8% of those to rank 20th in the country.

They’re on the plus side of 51% on two-point shots and also excel at the free throw line at 76.8%. Toledo also takes excellent care of the basketball with a TO% of just 16.4%. That is among the top-50 teams in the nation. There is a lot to love about the offensive profile for this team.

Defensively, Toledo struggles to prevent offensive rebounds, but Akron may not be able to take full advantage. While Toledo is strong on the offensive glass, Akron is similarly strong on the defensive glass. Toledo is 275th in the nation in ORB% against according to Bart Torvik. That is really the only major defensive blemish for the Rockets. Opponents are only shooting 28.6% from distance. Akron’s 14 threes were a season-high against this defense.

Defense is pretty optional in the MAC for the most part. We’ve seen a lot of high-scoring games. The ones that haven’t been high-scoring have been because of bad offense, not good defense. Akron, the best defense in this conference, is 112th in adjusted defensive efficiency per Torvik.

It is worth pointing out that the Zips have played the weakest conference schedule so far according to Torvik. This is the start of an enormous stretch with games against Toledo, Kent State, and then Ohio. All three teams are in revenge spots.

I’m not going to overthink this game. This is an extremely high total for a couple of teams that don’t play at a breakneck pace, but there will be a lot of offensive efficiency on display and a lot of three-point shots. The rate of threes creates a higher element of variance to this game because the winner will probably be the team that is more successful from three-point range. I’m not going to try and handicap that.

Instead, I’ll look for a lot of points. Even if we take OT out of the equation in the first game, Toledo has surpassed 80 points in regulation in seven of the last eight games. Akron makes a lot of shots themselves.