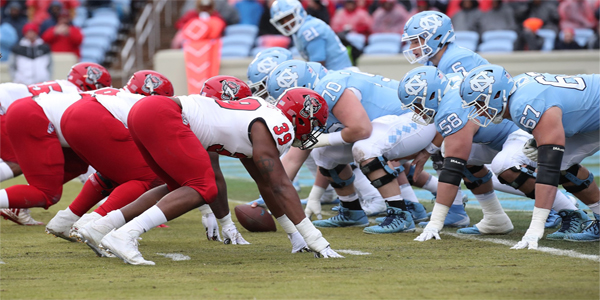 We are sure that not many of you, no matter what kind of setbacks you may have endured, have been beaten 73-7 in a football game that everyone could see. That was Georgia Tech’s experience in losing to the #1 team in the land last week. How they are able to get up off the floor after that is a mystery until they kick it off against Boston College this Saturday (4 PM ET).

North Carolina has to respond as well, as they lost the game to Florida State, and their #5 national ranking along with it. And the NC State Wolfpack lost their quarterback. We’ll see how they move ahead with another one.

So there are a lot of teams on the rebound this week in the ACC.

Ouch! Both of these teams took it on the chin in their last outing – the yellow Jackets especially so, as they got bounced to the tune of 73-7 by a Clemson team that appeared as if they were looking to make a statement, whatever that statement was. Now it’s G-Tech’s turn to make a statement, but can they? We do like some of the things freshman quarterback Jeff Sims has done. Still, he’s been prone to mistakes. Thus, might have to grant an edge to Boston College, which has the more experienced QB in Phil Jurkovec, the Notre Dame transfer who has injected enough of a spark in the offense that the Eagles have reversed field and gone to more of an air game under first-year coach Jeff Hafley.

We did not appreciate last week’s underachievement in the part of BC, which had a short-handed, defensively-challenged Virginia Tech team in front of it and couldn’t do anything. They have covered one of their last seven when laying points. And we have every reason to expect a big effort by G-Tech after enduring that humiliation last week.

But the number is actually pretty reasonable here. BOSTON COLLEGE

Well, it had to be a stinging experience for the Tar Heels last week as they lost to Florida State. With that they blew a #5 national ranking, which brought with it some hope that they could be in the hunt for a college football playoff spot.

Sometimes the best prescription to “get well” involves a true rivalry game. And if that rival is wounded; well, all the better.

Quarterback Devin Leary is not going to be part of the NC State offense moving forward, at least not in the immediate future. He suffered a broken fibula against Duke that will keep him out of action for a period of 4-8 weeks. He threw for 879 yards and eight touchdowns.

The new guy moving forward is Bailey Hockman, a junior who’s had three TD passes and seven interceptions in his career. He had come into the game against Virginia Tech a few weeks ago and was intercepted twice and sacked three times.

So if you are looking to put the check mark on the “edge” in the quarterback matchup, that has to go to Sam Howell, UNC’s talented soph who did about what he wanted in last year’s meeting, as he threw for 401 yards in the 41-10 victory. Howell gets it down the field (9.7 yards per attempt), and North Carolina has the look of a pretty good bully, although the Wolfpack has covered four of five games. NORTH CAROLINA

BetAnySports really brings college football betting to life. They give you reduced juice for a great break in the odds, and then, if you really want to take the action to another level, Sports Betting Prime enables real-time wagering…….. There are lots of ways to open up an account; use your debit card, credit card, person-to-person transfers or the virtual currency of Bitcoin, which is fast and easy with their automated system, and NEVER incurs a transaction fee!