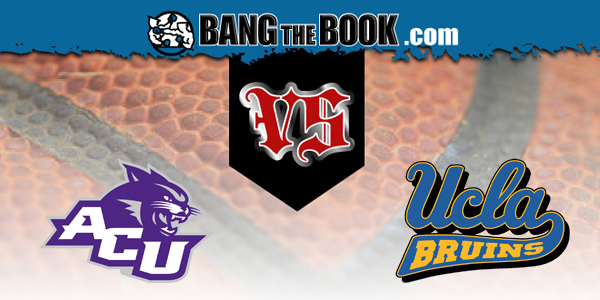 Few may have thought that the #11 seed and #14 seed would be battling in the Round of 32 in the NCAA Tournament, but it is indeed happening.

The UCLA Bruins have had to play twice to get here, and they beat pretty good teams in Michigan State and BYU to get here. But considering they did not end the season with a flourish, they have defied expectations.

The Abilene Christian Wildcats were indeed expected to be a tough “out,” and Texas made it a lot tougher on themselves in losing straight-up as a 3-seed.

So here we go, with a Monday game for the right to go to the Sweet Sixteen. Game time is 5:15 PM ET at Bankers Life Fieldhouse in Indianapolis. And if you are a BetAnySports customer, you’ve got reduced juice for a better deal on the odds, as well as Sports Betting Prime, which enables real-time wagers while the game is in progress.

Amazingly, ACU shot just below 30% against Texas – and by the way, no one had done that for ten years and still won an NCAA Tournament game – but the key to their victory was in creating extra possessions for themselves through turnovers. They shot the ball 27 more times than the Longhorns, and that is incredible.

Texas committed 23 turnovers and allowed 20 offensive rebounds, and those are fundamental breakdowns that are going to end up costing head coach Shaka Smart his job. Even with all of that, it took two free throws from Joe Pleasant with just 1.2 seconds left to preserve the 53-52 victory.

Now Joe Golding is 71-22 in these last three seasons as coach at Abilene Christian, and all those turnovers are no accident, as his team has been better at that than any other team in the country.

So obviously the challenge for UCLA is to be able to take care of the basketball. They have done a relatively good job at that, with TO’s on just 16% of its possessions on the season.

And the Bruins have a legitimate hot hand in Johnny Juzang, who was little-used by John Calipari at Kentucky, but has emerged as a hero for a program that was reduced to having to win a play-in game to make it into the 64-team field.

Juzang has scored 23 against Michigan State and 27 against BYU in the tournament thus far, successful on 19 of 36 field goal attempts overall (and 50% from three-point range).

A meaningful matchup here will take place at the three-point arc when UCLA has the ball. The Bruins are a pretty sharp 37.4% from downtown, while the Wildcats are one of the best in the nation at stopping those shots (29.4% allowed).

Texas actually hit 45% of their shots against ACU the other night, but they just couldn’t hold onto the ball. Jericho Sims and Kai Jones, the big guys who were supposed to do some business inside, made seven of seven inside the arc between them, but Matt Coleman, a part of the Texas team that won the NIT two seasons ago, committed seven turnovers.

We would say that it is kind of alarming that Abilene Christian made just 17 of 49 shots from two-point range. If they do that again they won’t advance. Seven-footer Kolton Kohl scored just six points, playing only 19 minutes. If he can’t make more of a contribution, that puts ACU in trouble as well.

Without a consistent offense, Abilene Christian comes up short against the Bruins, who have sure-handed Tyger Campbell running the offense with nearly a 3-1 assist-turnover ratio. Lay the points.