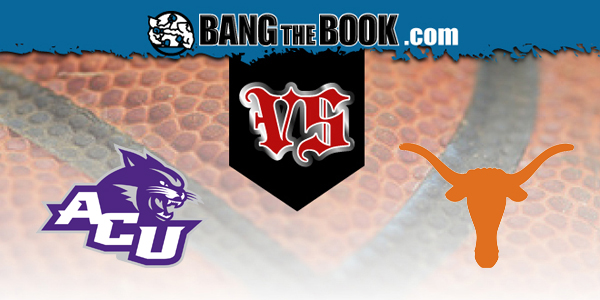 A busy day of basketball is on the docket with March Madness, plus some continued action over in the NIT, where one top seed has already gone down and another has had a big scare. As everybody shouts from the rooftops, “THIS IS MARCH!”

We’ll take a look in this preview at the late game between Lone Star State teams featuring Abilene Christian and Texas. The Longhorns are favored by 8.5 with a total of 140 per the fine folks at Bookmaker Sportsbook. Many will probably look at this line and believe it is too short for the Big 12 Tournament champs and the champions of the Southland Conference.

Let’s do a deep dive and see if that is indeed the case.

Abilene Christian would have been the favorites in the Southland Conference even if Stephen F. Austin wouldn’t have announced a postseason ban. The Lumberjacks were set to be banned from postseason action next year, but appealed to the NCAA to do it this season instead and were given the green light to bow out.

The Wildcats beat Nicholls State 79-45 in the championship game after receiving a bye to the semifinals. They beat Lamar 93-71. The Southland Conference is not very good, as we all know, and the league’s third-best team, Sam Houston State, was knocked out by Lamar. There are still some intriguing things about this ACU bunch.

For starters, nobody in the country had a higher TO% on defense than Joe Golding’s team. Abilene turned opponents over at a 26.7% rate for the season. Teams had trouble shooting the basketball against Abilene with a 29.1% success rate from three and a 46.3% success rate from two. Obviously you have to take those numbers with a grain of salt given the conference, but as we’ve seen time and time again, sometimes the teams coming from these low-major conferences are legit. Just ask Ohio State for their thoughts on the Summit League.

This is an experienced team with a lot of length and a lot of depth. Seven-footer Kolton Kohl is a monster on the glass and a pretty efficient shooter in the paint. Kohl’s presence also allowed the Wildcats to get some good looks from three, shooting 37.7% in the process. Don’t sleep on this team.

If there is one worry about Abilene, aside from the strength of schedule disparity, it would be that the Wildcats foul a lot. They’ve had some games with extremely high free throw rates for the opposition, including a 51-44 loss to Texas Tech back on December 9 and their March 2 win by two over Stephen F. Austin.

Texas may not have won the Big 12 Conference Tournament last week, but caught a break because Kansas was unable to play due to COVID-19 protocols. Instead, Texas only had to play twice and beat Texas Tech by a point and then beat Oklahoma State 91-86 to cut down the nets and probably improve by a line in the seeding discussion. This is a Texas team that has had some ups and downs, but five of their seven losses have been in games decided by six or fewer points.

In other words, they’ve basically been in every game. They have eight Quad 1 wins. Abilene Christian played two games above Quad 3 and lost both. There are some concerning things about this Texas team. One is that Shaka Smart’s defense, which is universally known for forcing turnovers, has not done that this season. Texas has a negative TO% with a 20.2% rate on offense and a 17.8% rate on defense. They’ve also shot under 71% at the free throw line, which could make the difference in covering given where this spread sits.

Texas is a pretty good offensive team, though, with a top-80 mark in both 3P% and 2P%. The Longhorns are also a pretty solid defensive squad, holding opponents to just 45.8% on two-point attempts. That was, of course, against a much tougher schedule than what Abilene was forced to face.

Since Shaka Smart’s Final Four run with VCU in 2011, his teams have not gotten past the second round. He’s struggled in this format and Texas has been one-and-done twice. This is probably his best Texas team over his six seasons, but he’s been rather underwhelming in Austin if we’re being honest. There is a fair amount of pressure on him and his team in this game.

It will be paramount for Texas that they take care of the basketball in this game. The Southland Conference is not known for ball security by any means, so Abilene’s TO% is pumped up a little bit, but this is still an aggressive defense and teams don’t change their spots when they get to this point.

Abilene could succeed in speeding Texas up a tad and this looks like a game ripe for transition points and also a high number of free throw attempts. Texas enters the game 291st in FT Rate against. Abilene is 333rd. I think this one has a good chance at going over 140.