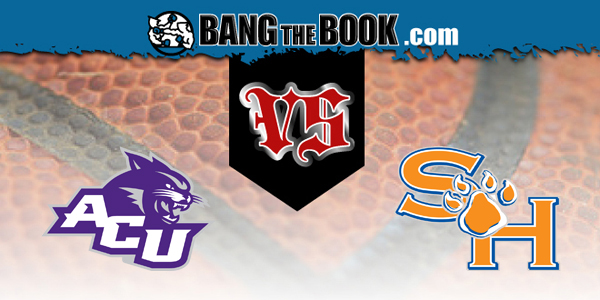 A busy Wednesday card in college basketball features a lot of interesting matchups and games worthy of your attention. Here at BangTheBook, we try to look at under-the-radar games and try to find some good edges in those games that are likely to have more betting value because they are not from premier conferences.

We broke that rule the last two days by talking about Kansas vs. Baylor and Alabama vs. LSU with a couple of winning picks in those two games, but now it’s time to get back to what we do best.

Games like Abilene Christian vs. Sam Houston State. The Southland Conference doesn’t get a lot of love, but you can find some great betting opportunities and it looks like we have one in tonight’s game. Abilene Christian is -3.5 at Bovada Sportsbook with a total of 141.5 for tonight’s tilt in Huntsville, TX.

ESPN+ will have coverage of this one with a 9 p.m. ET tip-off.

Abilene Christian is a name you should know this season. Joe Golding’s team is off to a strong 11-2 start with a 3-0 record in conference play. The Wildcats could very well be the recipient of the conference’s lone NCAA Tournament bid. The only losses for Abilene Christian came by seven against Texas Tech and 13 against Arkansas. In the Texas Tech game, ACU struggled terribly on the offensive end with .688 points per possession, but held the Red Raiders to .798 PPP.

Abilene Christian has played four lower-division teams, which has hurt the strength of schedule numbers quite a bit and the first three games against Southland Conference teams have featured teams ranked 327, 333, and 337 by Bart Torvik. There are some SOS concerns with this team.

However, the Wildcats lead the nation in TO% on defense at 29.1%. They’ve held opponents to just 23.4% from distance and 47.3% on two-point shots. Arkansas and Texas Tech had success on the offensive glass, but few other teams have. This is a stout defensive squad that should also be one of the better offensive teams in the conference.

A good road test awaits here against Sam Houston State that should allow us to find out a lot about the Wildcats. They are ninth in eFG% defense, but it is fair to poke holes in their resume because of the schedule to this point. Of course, all you can ask out of a team is that they beat the teams in front of them and do so in the way that they are supposed to and the Wildcats have done that to this point.

The Bearkats are off to a 5-0 start in conference play and an 11-5 start overall. This is a team that has played a much tougher schedule, with non-conference clashes against SMU, Texas Tech, Boise State, LSU, and Texas. Even Rice is a better team than most of what Abilene Christian has seen. The Bearkats were also at least tested against Nicholls State, probably the fourth-best team in the conference.

Jason Hooten’s squad has fired away with great accuracy from deep, shooting 37.1% on the season. Furthermore, in five conference games, the Bearkats have canned 43.6% of their triple tries. They’ve taken a lot of them, too, shooting at least 24 in each of the five games.

If Sam Houston State takes care of the basketball, an upset is certainly possible, however this is a team likely to regress on the offensive end. The Bearkats shot 34.8% from three for the season last year and 33.6% in conference play. The margin for error is thin for Sam Houston State because Demarkus Lampley and Zach Nutall provide just about all of the offensive punch.

Collectively, Lampley and Nutall have made 71 of the 111 made threes and have taken 178 of the team’s 438 shots. Hooten plays a lot of different rotations to work guys in around his two star players. Against a much more talented team like Abilene Christian, an off night from one or both of those guys would make things extremely difficult for SHSU.

The Southland Conference generally isn’t great, but it is a conference dominated by the top team, Stephen F. Austin. Lately there has been a little more parity, with these two teams in the mix.

Abilene Christian has more scoring depth and more reliable options. Their three-point defense has been exceptional this season and will be matched up against a three-point offense due some regression. Abilene should also get extra possessions in this game by virtue of their ability to force turnovers. Empty trips with three-point attempts and turnovers would be very costly for Sam Houston State and likely too much to overcome.