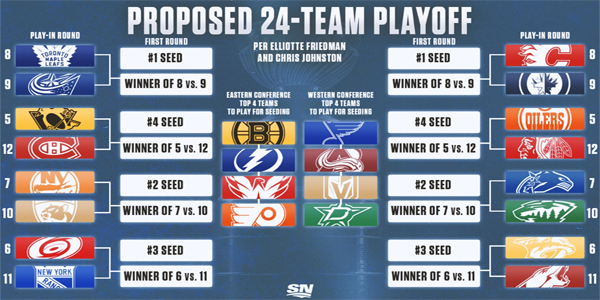 With any luck, the NHL return plan will start July 30. Edmonton and Toronto have been named the hub cities, with Edmonton chosen as the host city for the Stanley Cup Finals.

There will be 24 teams in the NHL playoffs. The top four seeds in each conference will participate in a round-robin to determine seeding, while the other 16 teams play a best-of-five play-in round. The remaining playoff rounds will be the standard best-of-seven format.

The Boston Bruins, Tampa Bay Lightning, Washington Capitals, and Philadelphia Flyers are the four top seeds in the Eastern Conference and the St. Louis Blues, Colorado Avalanche, Vegas Golden Knights, and Dallas Stars are the top four seeds in the Western Conference. From a futures standpoint, they make a lot of sense because they are guaranteed to move into the first round. They don’t have to navigate a play-in round in order to advance.

On the other hand, the teams that play in the play-in round will have to ramp up the playoff intensity a whole lot quicker than those eight teams that are just playing for seeding. Realistically speaking, there aren’t a ton of advantages for seeding at this point in time. All of these teams are on equal footing having not played for a long time and there are no home ice advantages, unless you are located in one of the hub cities. Those teams will still be required to stay in hotels as opposed to at home, given that places like Columbus, Edmonton, and Las Vegas have been rumored to be under serious consideration for hosting games.

The play-in series are Maple Leafs vs. Blue Jackets, Penguins vs. Canadiens, Islanders vs. Panthers, and Hurricanes vs. Rangers in the East and then Flames vs. Jets, Oilers vs. Blackhawks, Canucks vs. Wild, and Predators vs. Coyotes in the West.

We’ll take a look in greater detail at the individual series betting odds as things move forward, but here are the overall Stanley Cup Futures odds from Bookmaker Sportsbook as of July 5, 10 a.m. ET:

There are a lot of considerations from a futures standpoint. The play-in round will likely be more taxing than the round robin. Some teams have gotten a whole lot healthier with the lengthy downtime, like Columbus and Colorado. Some teams play a more up tempo, free-flowing style, which could be a detriment while trying to get back into rhythm early in the process. There won’t be any margin for error.

Goaltending will obviously be huge. The best goaltenders have the greatest chance at bailing out their teams if they don’t play well.

Some of these teams would not have made the playoffs under the traditional format. Seven teams – Buffalo, New Jersey, Ottawa, Detroit, Anaheim, Los Angeles, and San Jose – were left out. The second-chance teams are not as good as their opponents for that play-in round, but the best team doesn’t always win in the playoffs and certainly won’t win all of these series under such unconventional conditions.

As far as some futures prices worth considering, there are still a lot of variables, including how the schedule will set up, if any players on any of the teams are diagnosed with coronavirus, and where the games will be played. Losing a star player to a positive test could make things really challenging for a team. Therefore, you probably want to try and find teams with a lot of depth that aren’t overly reliant on a couple of standouts.

You also want to find a goaltender that you can trust. That is huge in this format. Obviously goaltenders are subject to variance, but it would be hard to take a team like Columbus, for example, since Joonas Korpisalo and Elvis Merzlikins are young guys without much of a track record.

Dallas Stars (+1600) – The Dallas Stars have all sorts of problems scoring. Maybe that will be a bad thing in this format, but they are guaranteed a spot in the first round and most definitely have the goaltending with Ben Bishop. They also have a very capable backup in Anton Khudobin. The idea that a starting goaltender might pop a positive COVID-19 test is something that makes this an even tougher handicap. Still, Dallas plays a tight-knit, defensive style and that seems like a positive in this format.

Nashville Predators (+3500) – The Predators are another team that could benefit from the shutdown. It had been a whirlwind season with the firing of Peter Laviolette and quite a few man games lost throughout the year. Juuse Saros outplayed Pekka Rinne, which is a big of a concern going into the playoffs, but they have good goaltending depth in the event that something unforeseen happens. This is still a very good team with excellent depth on the blue line, something else that matters a lot in these unique times.

Washington Capitals (+1100) – Once again, another team that has a ton of depth up and down the lineup, plus a group of guys that have won in the playoffs before. Braden Holtby was not having a good season with a 3.11 GAA and a poor .897 SV%, but now he can also wipe the slate clean and get things figured out. Washington has a lot of scoring threats and tremendous structure. They’re a bit of a short price based on reputation, but they deserve to be among the Eastern Conference favorites. They also have one of the league’s deadliest power plays and special teams are going to play a huge role in determining the winners of these series.