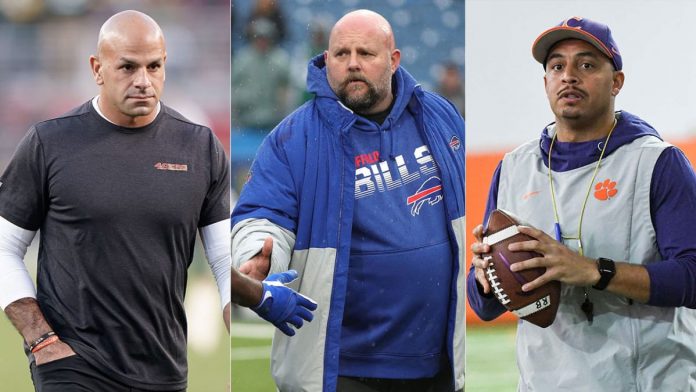 Every year, as NFL fans turn their attention to the postseason, non-playoff teams begin building for the future by hiring new head coaches.

After Sunday’s regular-season finale, a total of six NFL head coaching positions came open. We take a closer look at each position’s positives and negatives.

There is very little history, no culture of winning, and you have an owner that continues to flirt with London as a possible relocation spot. But the Jaguars head coaching position does have some very attractive qualities.

This team is projected to have the largest amount of salary cap space, the AFC South is a winnable division, and they will go into April’s draft with several high-round picks, including the No. 1 overall pick, presumably Clemson quarterback Trevor Lawrence.

The Chargers don’t need a top five pick because they already have their young franchise quarterback in Justin Herbert. There is also Joey Bosa on the defensive side of the ball.

But the Chargers are a tenant in their new stadium, owner Dean Spanos doesn’t have a good track record, and you have to compete against Patrick Mahomes twice a year for the next decade.

One possible way to counter that is to hire Chiefs offensive coordinator Eric Bieniemy, who is currently third in online betting odds to get the job at +600.

Matt Ryan is a great quarterback, but he’s aging. The Falcons also rank in the bottom five in terms of available salary cap space, and you can’t make any space because of Ryan’s dead cap hit.

The Falcons do have the fourth pick in the draft, and they did finish this season playing strong football, but this looks like a major rebuild, and that may keep the very best coaching candidates away.

Good fans, a division there for the taking, and a superstar quarterback in Deshaun Watson make the Texans job very attractive.

On the downside, their 2021 first- and second-round draft picks belong to the Miami Dolphins, they have very little cap space, and the defense is absolutely terrible.

Still, players like Watson don’t come along very often, and he makes a rebuild much easier.

Matthew Stafford continues to play at an elite level, even when he has nothing around him, which has been for most of his career. But his future with the franchise is in doubt, which may make the difference in a top candidate taking the job or the Lions once again taking the leftovers.

The Lions will pick seventh in April’s draft, and rookie running back D’Andre Swift did show promise at the end of the season. But turning the Lions into a winner feels like a Herculean task.

Despite the history with the Jets, this is actually a desirable job. They have the No. 2 overall pick and the Seahawks’ first- and third-round picks because of the Jamal Adams trade.

There is tons of cap space in New York, and the Patriots are no longer the immovable force in the AFC East. The only thing left to be sorted out is the future of Sam Darnold now that Lawrence is an unlikely replacement.