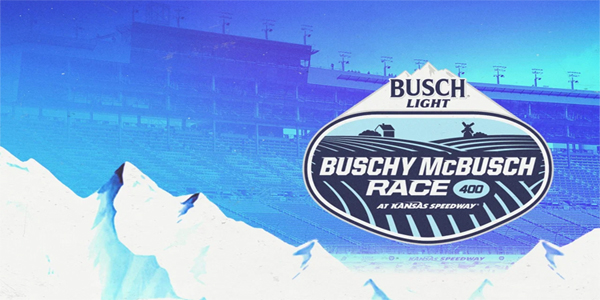 Busch Beer has been a longtime sponsor of all things NASCAR. The Buschy McBusch Race is a new one, though. A good cause led to a great name, as fans of NASCAR and fans of beer came together to raise a large sum of money for Farm Rescue. For $1, fans could participate in a naming contest for the 11th race of the 2021 NASCAR Cup Series season.

While the race has a fun name, it will still be all business for the drivers. Odds are posted at BetOnline Sportsbook and we’ll have a full breakdown of the race for you.

Snakebitten points leader Denny Hamlin is the favorite for this week’s Buschy McBusch Race 400. Hamlin is +500 as he looks to finally get to the winner’s circle. He has eight top-five finishes out of 10 races and has led the most laps in three straight races, but has yet to win one.

Joe Gibbs Racing teammate Martin Truex Jr. is second on the betting board at +650. Kyle Larson is +700, as he has a win, a second, and a fourth on the three 1.5-mile tracks raced to date. Brad Keselowski and Ryan Blaney are +800, while Keselowski’s Team Penske teammate Joey Logano is +1000.

Chase Elliott, Kevin Harvick, and Kyle Busch are all +900. Busch has two wins over nearly 70 races and Harvick only has three top-five finishes this season. It seems like a slight to have Elliott priced the same, but more on that later.

Denny Hamlin is the runaway points leader right now, even though he’s the only driver in the top five without a win and one of three in the top 10 without a celebratory shower. Hamlin has 53 more stage points than anybody else, which is a big reason why he sits atop the standings.

Hamlin’s 446 points give him a comfortable 87-point lead over Martin Truex Jr. Joey Logano sits third in points, even though he finished 39th last week at Talladega. William Byron was second last week to move into fourth place with 351 points. Ryan Blaney is fifth with 346 points.

There is a big drop from Blaney to the rest. Brad Keselowski has 318 points and sits in sixth, followed by Kevin Harvick with 308, Chase Elliott with 306, Kyle Larson with 300, and Christopher Bell with 280. Michael McDowell and Alex Bowman sit outside the top 10, but each have wins.

Who has done the best at Kansas Speedway? This is a twice-a-year stop on the 1.5-mile track, but the second stop only began in 2011. The second race is a playoff race held in October. The first race was held in 2001, so a maximum of 30 starts has been possible here.

Ryan Newman, Kurt Busch, and Kevin Harvick are the drivers with 30 starts here. Harvick is the most accomplished active driver at Kansas Speedway with three wins and 10 top-five finishes. He has averaged a top-10 finish at Kansas throughout his career and has led the most laps with 949.

Hamlin and Logano join Harvick in the “Three-Win Club” at Kansas, though Hamlin’s two wins have come recently and Harvick’s last win here was 2018. Logano won the most recent race in October to end a five-year drought at Kansas.

If we look at the last 10 races, that is where Elliott comes into play. Over his 10 starts, he has a win and three additional top-five finishes. Harvick’s average finish has been 5.5th place over the last 10, but we’re talking about a much different Harvick these days. Truex has been really strong here as well, leading 457 laps in the last 10. Only Harvick has more with 474.

This has actually been a good track for Alex Bowman, who has seven starts here with two top-five finishes and five top-10 finishes.

It is tough to use recent success this season because Larson has upgraded teams and Harvick and Busch are nowhere near the drivers that they used to be. The Team Penske guys are still running quite well and Elliott is a much greater factor than he was early in his career. You have to put a lot of asterisks and caveats on things this year.

Elliott is a pretty big factor in a lot of races and this has been a good track for him. He seems to run really well at Kansas and Charlotte as far as 1.5-mile tracks go, so we’ll look at him here.

Hamlin obviously has a great car every week and he’s going to win sooner rather than later. At +500, if this is the week, you don’t want to miss the boat. With a pretty standard 1.5-mile track and a lot of clean, competitive racing, long shots are not really an option this week.