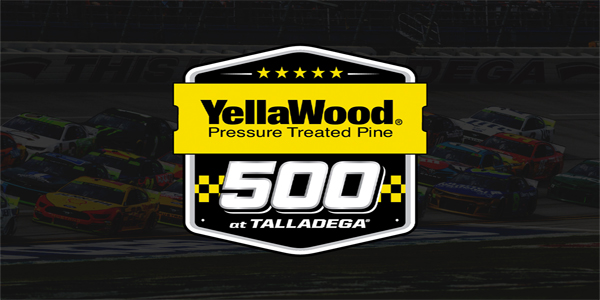 The Yellawood 500 at Talladega Superspeedway is Sunday’s NASCAR race and even though it is the second race in the Round of 12 in the playoffs, it sure feels like the midweek announcements about the 2021 NASCAR Cup Series schedule are taking center stage.

NASCAR is adding more road courses and will even run a dirt track race at Bristol next year in hopes of spicing up the schedule and drumming up more interest. We’ll talk more about that going into next season, but these remaining races in the Round of 12 are the right types of tracks for some interest.

“The Big One” is always in play at Talladega, as is the case on the Daytona International Speedway track. The Roval at Charlotte will be the deciding race for who advances to the Round of 8 and whose championship dreams are finished.

Let’s take a look at the Yellawood 500 with odds from MyBookie Sportsbook:

Generally speaking, the favorite in a NASCAR race is around +350 or +400, but not here at ‘Dega. The tapered spacer has replaced the restrictor plate, but the concept is the same at the Superspeedway in Alabama. The cars are neutered in the name of safety and that levels the playing field quite a bit to create a lot of close racing. Some people call it “rubbing”, which, that just sounds a little too sensual.

In any event, Brad Keselowski, Chase Elliott, and Denny Hamlin are the co-favorites at +900. Ryan Blaney and Joey Logano are +1000. As we’ll discuss, wins are pretty spread out at Talladega, which should come as no surprise. Keselowski has had the best success here with five wins in his 23 starts.

Kurt Busch won on his home track for the first time ever and that was really bad news for those at the bottom of the standings. Busch was likely to be among the four drivers cut from the playoff chase after this round of races, but he won and gets a free pass to the next round.

Now Kyle Busch, Clint Bowyer, Aric Almirola, and Austin Dillon are firmly on the chopping block. Kyle Busch is nine points behind Alex Bowman, who has shown better speed over these last few playoff races. Kyle is only 10 points behind Chase Elliott, so this is a big race for him, too. He was 22nd last week, but did win the second stage for his second stage win in as many races.

Bowyer, Almirola, and Dillon are win or bust in all likelihood over the next two races.

Kevin Harvick and Denny Hamlin are over 40 points clear from Keselowski in third. Busch’s win last week created a lot more drama than we had going into Las Vegas, so we’ll see if it happens again this week.

Here’s to turning up, slowing down, and cars that go real fast. The cars do, in fact, go really fast at Talladega. The spring race was actually the slowest of the last three years at 146.933 mph, but it required extra laps and there were quite a few cautions and a poor weather forecast. This race last year, which was won by Ryan Blaney, was also slowed by rain and pushed back to the next day.

If everything goes according to plan, we’ll see 188 laps here around the 2.66-mile asphalt oval. Things rarely go to plan at Talladega, though.

Brad Keselowski leads all active drivers with five wins. Joey Logano has three. Jimmie Johnson, Ryan Blaney, and Clint Bowyer have two. Bowyer could use one this week.

Eight active drivers have one win here. Aric Almirola, Matt Kenseth, Kevin Harvick, Denny Hamlin, Chase Elliott, who only has nine career starts at Talladega, David Ragan, Kyle Busch, and Ricky Stenhouse Jr. are the ones that have found the winner’s circle once in Lincoln. Nobody has a great average finish here because of the number of wrecks.

Harvick has 28 lead lap finishes out of 39 races. Kyle Busch has 26 in 39. Ryan Newman has 25 in 37. Johnson has 24 in 37. Hamlin has the best rate at 20/29 among the drivers with a lot of starts here. Almirola as actually been on the lead lap 17 times in 21 tries. In some respects, Talladega is just a war of attrition and you don’t want to get caught up in the damage.

As a result, you can take some chances with your selections this week. There are a lot of different guys to consider because this race is pretty wide-open. Almirola has five top-five finishes here in 21 starts and Stenhouse has six in 14, simply by virtue of being able to stay above the fray. They’re usually in a spot where they can be opportunistic and move up spots because they’re running behind the top-tier drivers.

With that in mind, we’ll throw a few darts at the board here. Feel free to go price hunting. Logano at 10/1 is the starting point because he’s an ultra aggressive driver and doesn’t care who he runs over in his way to get there, which is a good strategy at Talladega. It’s the same thing for Stenhouse, who wrecks as much as anybody in NASCAR, but has run well here.

Bowyer at +2800 is worth a look. He has to be aggressive because he’s not winning on the Roval next week. This is his best shot.

Last, away from Ford, we’ll take Erik Jones at +3300. Jones was fifth in the GEICO 500 and runs well on bigger tracks. He’ll round out the card.