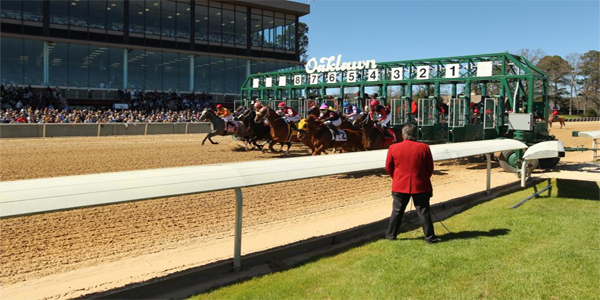 We’re going to try and find some stuff to write about at BangTheBook.com during the shutdown for all of the major sports leagues. This weekend, that includes horse racing. The Road to the Kentucky Derby is in full swing. Of course, who knows what will happen when 100,000 people are slated to be at Churchill Downs for the first leg of the Triple Crown, but the horses, trainers, and jockeys will prepare as though everything will go as planned.

This week’s signature race in the Road to the Kentucky Derby circuit is the Rebel Stakes at Oaklawn Park in Hot Springs, AR. This is a $1 million Grade 2 race at a distance of 1 1/16 miles. There are eight three-year-olds in the race and was the springboard back in 2015 for American Pharoah, who would go on to win the Arkansas Derby in mid-April and then the Triple Crown. Of course, as we know, American Pharoah also won the Breeders’ Cup Classic to cap off arguably the most impressive year for a three-year-old in the history of racing.

My focus here will be on the main event of the card on Saturday March 14, but keep in mind that there will be a ton of opportunities on the undercard with world-class jockeys and trainers all descending on Oaklawn. You’ll likely be able to get some top jockeys at good odds, but may also be able to find strong prices on the local guys that know each and every inch of the track.

To this point, we’ve had a lot of prep season races, but we’ve had six in the official First Leg of the Championship Series. Mr. Monomoy and Modernist won the Risen Star Stakes at Fair Grounds in Division 1 and Division 2, respectively. Ete Indien won the Fountain of Youth at Gulfstream. Last weekend, King Guillermo won the Tampa Bay Derby, Mischevious Alex won the Gotham Stakes at Aqueduct, and Authentic won the San Felipe Stakes at Santa Anita.

There are only two races left in the First Leg of the series, with this Rebel Stakes at Oaklawn, which has the biggest purse of the First Leg races, and next weekend’s Sunland Derby. That is the longest of the races at 1 1/8 miles at Sunland Park in New Mexico, but that is a Grade 3 race.

Let’s break down the eight horses in the main event at Oaklawn Park on March 14 for the Rebel Stakes (morning line odds as of March 11):

1. Nadal (9/5) – Nadal is the race favorite at 9/5 with the superstar team of Bob Baffert and Joel Rosario. The three-year-old colt won the San Vincente Stakes at Santa Anita back in February, which was a seven-furlong Grade 2 race. Being a pacesetter, Nadal draws a good spot on the rail to get out in front and lead the pack. This will be the first race outside of Santa Anita, so that is something to keep in mind, but this is a world-class team and the favorite for a reason.

2. Excession (20/1) – Excession has the pedigree as the son of Union Rags, but that’s really about it. Disappointing finishes in the Lecomte Stakes and Risen Star Stakes at Fair Grounds have really lowered the ceiling of this horse. A win at Churchill Downs in a 1 1/16 mile race in November may have elevated the perception of this colt just a little bit too high. In all likelihood, it doesn’t belong in a race like this. Credit to Steve Asmussen for continuing to run it out there, but the speed figures just aren’t there.

3. Basin (7/2) – The second of three Asmussen horses in the field that all just happened to draw post positions next to one another is Basin. This is a horse that has not run in a race since September after winning the Hopeful Stakes Grade 1 race at Saratoga. That race was with Jose Ortiz in the irons instead of Javier Castellano. While this horse is a contender and could very well be a winner, this feels like a good race to shake off the rust before trying to make a push back at one of the April races like the Wood Memorial at Aqueduct or the Arkansas Derby back here at Oaklawn. Basin was the second favorite in the Hopeful and just outlasted the rest of the field on something of a sloppy track.

On a longer track, this is a horse that can make the distance. Most of these horses have maxed out as seven furlongs. Basin has, too, but the endurance shown at the end of the Hopeful, including a drift to the outside on the frontstretch, leads me to believe Basin can hit the board with relative ease.

4. Silver Prospector (4/1) – The last of the Asmussen colts is Silver Prospector. This is a horse that has shown good speed figures and has run some longer races, with two one-milers and two 1 1/16s under his belt. A win right here last month in the Southwest Stakes was a good bounce back to a fourth in the Smarty Jones to begin 2020.

This is a horse that won the Kentucky Jockey Club Grade 2 race over third-place finisher Tiz the Law, which won The Holy Bull and the Champagne Stakes. The Smarty Jones was run in the mud and muck. This week at Oaklawn also looks to be muddy. That could lead to value down the line, but it seems like an unfortunate circumstance this week.

5. No Parole (6/1) – Three starts, three wins for No Parole, trained by Thomas Amoss. Joe Talamo is one of the younger jockeys out there, but he’s very experienced at Oaklawn Park, so this could be something of a sleeper to hit the board. No Parole has wins at Fair Grounds and Delta Downs and may have to rely on Talamo to find the right spot in Arkansas. This, however, is a big step up in class and also an increase in distance for this horse. Talamo was not the rider for the Premier Night Prince at Delta Downs.

There will be a lot of dismissals of this horse for three wins as a big favorite with a lack of competition. This is a test, but this is a horse that could be sneaky to hit the board. If Talamo doesn’t use up all of his burst early in the race and can manage to scale back a frontrunner to leave something in the tank, it could get interesting.

6. Three Technique (6/1) – Astute readers will pick up on the football reference with Three Technique, who is actually owned by Bill Parcells. The team of Jeremiah Englehart and Luis Saez will try to hit the board for the sixth time in six races. It was nice to see Three Technique run well in the Smarty Jones in the slop because it was the first time that the horse was really tested. Of course, Three Technique finished second to Basin in an undercard race at Saratoga back in July.

Three Technique got a run in at Oaklawn in that Smarty Jones and a run in the mud and muck at Oaklawn, which is likely to come again this week with rain in the forecast throughout. He’s got a good chance to hit the board. Can he best Basin, Silver Prospector, or Nadal? That remains to be seen.

7. Coach Bahe (20/1) – We can probably throw Coach Bahe out this week. This is a three-year-old that hasn’t really run in any race of consequence for trainer Philip Bauer. This is primarily a turf horse trying to make a transition to dirt as a late arrival into the field. This one should be a non-factor.

We haven’t seen American Theorem since that day at Santa Anita, so we don’t really know what to expect. Tiago Pereira was in the irons for that race and will be again here. Finishing second to Eight Rings and John Velazquez isn’t anything to scoff at. It was a steady, strong run for American Theorem who moved a little bit too quick on the third turn and didn’t have enough left for the stretch run. Eight Rings just put it away at the end.

In other words, Pereira hit the gas too early. That race was the same length as this one. Did he learn from that mistake? That was also a clean track. What happened on a soggy track this week? There are some major questions to answer, but this is a horse that looks like a wild card.

This is a strong field this week and there are some tough choices to make. I’m actually going to skirt the favorite this week in Nadal, who seems like a pacesetter, but there will be additional pressure with a good field and a wet track.

Basin will be my pick here. This colt is untested at this length, but the effortless speed at the end of the seven-furlong Hopeful makes me, ahem, hopeful for a good finish here. That was also a bit of a soggy track and he conquered it with ease at the end.

I also like Silver Prospector and Three Technique to hit the board. I may throw American Theorem into a box trifecta or two because that horse is a wild card that could hit the board and be a surprise finisher, despite the lack of star power with the jockey and trainer.