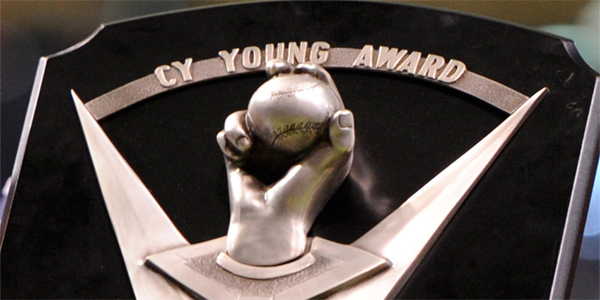 National League pitchers will now have to face the DH for all games as opposed to just road interleague games. That will have an impact on everybody, but the best of the best are likely to be the best equipped to overcome that new hurdle.

There are two sides to this story, though. Pitchers will have a harder time navigating the lineup because they will have to face the DH, but those NL starting pitchers and AL starters throwing in road NL parks no longer have to worry about getting taken out of a game for a pinch hitter.

Whether or not that will help or hurt pitchers remains to be seen. I threw some thoughts up in a Twitter thread to examine this topic and (hopefully) crowdsource some opinions.

Pitchers at the bat only accounted for 5.15% of the plate appearances against for NL pitchers last season, but accounted for 9.74% of the strikeouts by NL pitchers. That should lower strikeout rates for the non-elite SP, at least a little bit.

Here are the odds from 5Dimes Sportsbook for the NL Cy Young Award:

Strikeouts will be important. Generally speaking, being on a good team is also important because PITCHER WINS, which is a terrible metric to determine a pitcher’s value, but some of the voters have not joined us in the 2000s yet. That means that bullpen strength will be important so pitchers don’t lose their limited chances to get wins. After all, we’re talking 10-12 starts now instead of 30-32.

Some of these guys are just a victim of circumstance. Max Fried’s Atlanta Braves have suggested that they will utilize their pitching depth early, limiting starters to 2-3 innings. That hurts his ability to rack up numbers. Same with Mike Foltynewicz, but he isn’t a legitimate option anyway.

Walker Buehler is typically brought along slowly by the Dodgers, so his early starts could be limited by pitch count or innings. That would also hurt him.

I’m not terribly interested in any of the short prices. Jacob deGrom is a deserving favorite and the Nationals triumvirate of Max Scherzer, Stephen Strasburg, and Patrick Corbin got fortunate that the start to the season was delayed after a long run to a title last season. Jack Flaherty’s second half was the stuff of legend and he’d be a unanimous Cy Young winner if he has 12 starts like that this season, but he and Buehler are not on my list.

Sonny Gray (+4000) – Sonny Gray got out of the Bronx and found a home in Cincinnati. Under the watchful eyes of pitching coach Derek Johnson, Gray blossomed with far and away the best K% of his career. He also had a .193 BA against, which is probably open to some regression this season, but he really maximized his arsenal in a way that he never had previously.

Gray got back to throwing more fastballs, but he located them in a much better way. He also increased the usage of his curveball and slider while limiting the usage of his sinker, as sinkers are among the most hittable pitches in baseball.

The Reds profile to be pretty good, have a good bullpen, and Gray could even take another step forward with the best pitching coach in the game.

His rotation mates, Luis Castillo and Trevor Bauer, are not bad options either, but Gray has the balloon price and probably the highest floor of the three.

Robbie Ray (+6600) – There are a lot of people excited about what Robbie Ray has done mechanically in the lead-up to this season. Ray’s two biggest issues have been the walk and the long ball. In 11 innings at Diamondbacks summer camp, Ray allowed one hit and struck out 17 batters.

Ray has always had the strikeouts. He has lacked efficiency. The walks and the long balls have made it a challenge for him to work deep into games because of escalating pitch counts in the middle innings. Ray is backed by one of the best defensive teams in baseball, which should limit potential damage, and he’s always had the swing-and-miss arsenal.

In terms of a long shot price, you could do a lot worse than Ray for this 60-game sprint.