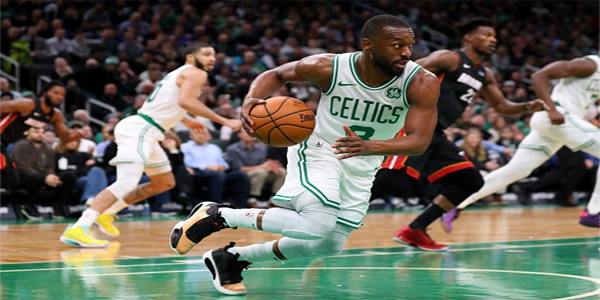 The 2020 NBA Playoffs Eastern Conference Finals tip off Tuesday, September 15, as the fourth-seeded Miami Heat, take on the third-seeded Boston Celtics in the bubble. Of course, there’s no home-court advantage and fans on the stands, but we’re about to see one of the most interesting playoff series in the last few years.

Both Miami and Boston upset the odds in the semis, showing some impressive displays, especially the Heat. They meet each other in the playoffs for the first time since 2012 when the Heat beat the Celtics in the conference finals in seven games.

Hereof, we have prepared all need-to-know betting tips and trends for the 2020 Eastern Conference Finals between Miami and Boston along with the latest odds update and our betting predictions.

The Heat are coming in full strength, while the Celtics have some problems. Gordon Hayward is still recovering from an ankle injury, and the Celtics head coach Brad Stevens said that the 30-year-forward should return at some point the conference finals.

Hayward will certainly miss the opener Tuesday, and we’ll call him questionable for Game 2.

The No. 3 Celtics are -132 favorites to win the Eastern Conference title on MyBookie, while the Heat are listed at +112 odds to reach the 2020 NBA Finals on BetOnline.

Boston has dominated Miami over the previous few years, winning 13 of their last 17 encounters, so the bookies expect this trend to continue. I think the bookies have underestimated the Heat who have been terrific in the previous two rounds.

Interestingly, the Celtics have been defeated in the conference finals three times over the last eight years.

Miami is 8-1 SU and ATS on the postseason. The Heat swept the Pacers in the first round and stunned the top-seeded Bucks in the second round, so their confidence must be sky-high.

Boston swept the 76ers in the first round, but the Celtics had to play seven games against the Toronto Raptors in the semifinals, so they could struggle with fatigue. The Celtics eliminated the reigning champs playing without Gordon Hayward, and there will be some tired legs, for sure.

The Celtics went small against Toronto, as Marcus Smart replaced Hayward in the starting lineup, joining Kemba Walker in the backcourt. The Heat love to play small-ball, too, with Jae Crowder at four, while Duncan Robinson and Jimmy Butler both can help on the low post.

This should be a proper defensive battle between two teams that match each other very well. They both like to play at a slower pace, averaging just over 96 possessions per 48 minutes.

The defense will be a key factor, no doubt, but whoever wants to win the series will have to find a way to execute offensively. Jimmy Butler and Jayson Tatum will guard each other for most of the time, but, as I’ve said, both teams possess excellent defensive awareness and are capable of switching everything.

The Celtics need to slow down Goran Dragic, as the 34-year-old Slovenian is averaging 21.1 points and 4.7 assists this postseason. Duncan Robinson is a lethal 3-point shooter and could an X-factor for the Heat in this matchup, while the Celtics hope to see more from centers, Daniel Theis and Robert Williams.

The under has hit in five of the last six encounters between Boston and Miami, and I suggest you keep it in mind when betting through the series. As I’ve mentioned, these are the best two defensive teams in the Eastern Conference over the last few four weeks.

I would dare to predict the winner, but this clash could easily go either way. Betting on exactly seven games at +200 perfectly makes sense, and I expect to see a nail-biting series. Both teams are led by great tacticians, but Erik Spoelstra has a couple of championships under his belt, so I’m taking the Heat.