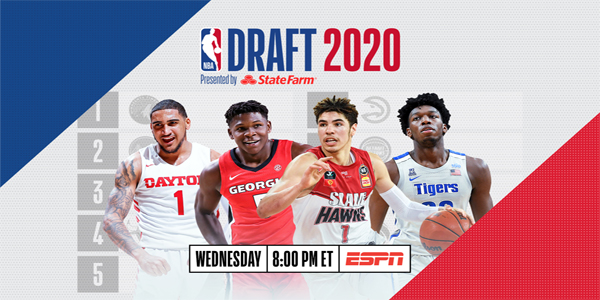 The 2020 NBA Draft is set for Wednesday night, and the sports bettors around the world are ready to lay the odds. The bookies have listed plenty of intriguing props, so betting on the NBA Draft props seems more interesting than ever.

I’ve prepared a full list of the available markets along with the latest NBA Draft props odds update according to BetOnline. You might find some value down below, while I bring you a few betting picks, so let’s take a closer look.

The latest rumors around the league suggest LaMelo Ball as the No. 1 pick in the upcoming draft, but the truth is nobody knows who’s the Minnesota Timberwolves preferred choice. Also, some say that the T-Wolves would consider trading their top pick overall, and that tells you a lot about the upcoming draft class.

The bookies are pretty sure that LaMelo Ball or Anthony Edwards will go first, while the Golden State Warriors should select James Wiseman, who’s arguably the most talented big man here, with the No. 2 pick.

Although Anthony Edwards looks like he’s ready for the NBA after a solid freshman year at Georgia, I think the Timberwolves will take LaMelo Ball, who decided to play professional basketball in Australia instead of going to college.

Edwards is a 6-foot-5 shooting guard, while Ball is a 6-foot-7 tall point guard, so I think Anthony would be a better fit for the Timberwolves, who already have D’Angelo Russell at PG. On the other hand, Ball would certainly bring more media attention, so I’m not sure what Minnesota wants.

Therefore, I’m not laying the odds here, but betting on the Warriors to pick up James Wiseman perfectly makes sense.

The over pays +120 here, and many NBA experts believe James Wiseman will end up in San Francisco. The Warriors need a big body in the paint, and Wiseman is a 7-foot-1 center with a pretty high ceiling.

Due to a suspension, Wiseman played only three games in his freshman year at Memphis, averaging 19.7 points, 10.7 rebounds, and 3.0 blocks per game. There’s a lot of room for improvement on both sides of the ball, but James could become one of the best two-way centers in the league.

While Deni Avdija is the hottest prospect coming from Europa, Obi Toppin became the National Player of the Year at Dayton despite being a zero-star recruit.

Many compare Avdija to Luka Doncic, but the 19-year-old Israeli is not that good when it comes to scoring. Still, Deni has a great basketball IQ, and thanks to his court vision, Avdija is a legitimate playmaker despite his size (6-9, 220 lb).

On the other side, Toppin exploded in his sophomore season with the Flyers, averaging 20.0 points per game on 63.3% shooting from the field. Obi’s work rate should make him an excellent professional basketball player in years to come, so he could be one of the best picks at the 2020 NBA Draft.

Both these guys will be selected among the top 10 picks, but I think Avdija will go first. A few teams including the No. 4 Chicago Bulls and No. 5 Cleveland Cavaliers would like to add Deni’s talent to their rosters.

With the odds on the under at -250, the bookies show you how sure they are there will be fewer than five freshmen drafted in the top 10. Anthony Edwards, James Wiseman, Isaac Okoro, and Onyeka Okongwu are all projected as top 10 selections, but it would be a surprise if get another freshman joining this bunch.

Both Tyrese Maxey and Patrick Williams are good players and rank around the 15th spot, but I think there’s no way they will be selected in the top 10.

Of course, if you want some extra action on a draft night, the bookies have offered some crazy NBA Draft props to make things more interesting. Here’s the list of all markets available on BetOnline:

Who will No. 1 overall pick hug first?

Will any 1st round draftee put on the wrong team hat?

Will pizza be seen in any draftee home?

Will the No. 1 overall pick cry?

Will LaVar Ball be shown during the draft?

SIGN UP FOR A 100% DEPOSIT BONUS AT BETONLINE SPORTSBOOK

NBA Draft Props — Who Will – And Should – Go First Overall?