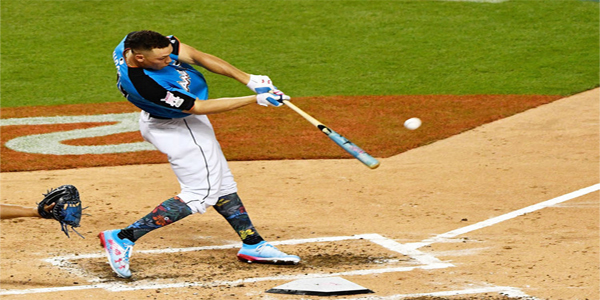 My favorite thing to write about for my annual MLB Betting Guide is the Home Run King prop. I really enjoyed writing this year’s and then COVID happened and we didn’t even know if we would get a baseball season.

Fortunately, we are, at least some part of one, and it begins on July 23. New odds for the Most Home Runs have been posted, along with a prop bet as to whether or not somebody will hit over 20.5 home runs.

The first and most pressing question that we need the answer to is how the ball is going to play. So far, based on anecdotal evidence from Summer Camp, the ball does appear to be juiced, however there have been reports that teams have been using Spring Training baseballs, like as a cost-saving measure, in these exhibition and intrasquad games.

So, we’ll just have to wait and see, I guess.

But, there are a few things that I can tell you. For starters, exit velocity, barrels, and Hard Hit % all stabilize very quickly for hitters. They typically reach a point of stabilization around 40-60 batted balls, so we won’t need a large sample size to know which hitters are going to make the most violent contact.

Let’s take a look at the odds from 5Dimes Sportsbook first and then take a deeper look at the players to consider:

There are way too many players on this list, but that’s fine. It’s easy to eliminate a lot of them.

Barreled balls are defined by Statcast as a batted ball that meets the exit velocity and launch angle thresholds and has an expected batting average of .500 or higher and an expected slugging percentage of 1.500 or higher. A lot of extra-base hits come as a result of barreled balls and a lot of home runs as well.

I’m not sure why Jimenez isn’t listed, but we’ll move forward without him.

First and foremost, Nelson Cruz at +3500 is a joke of a price. Cruz hit 41 HR in just 120 games and 521 plate appearances. Had he not missed time, he’d have set a new career high. His K% was even up last season. Fewer strikeouts would mean more home run opportunities. He’s also not going to lose plate appearances in interleague play now with the universal DH.

BET ON NELSON CRUZ TO HIT THE MOST HOME RUNS

Teammate Josh Donaldson at +7000 isn’t a bad bet either, if we’re being honest.

George Springer’s home run breakout also came with a smaller sample size of plate appearances because of injuries. He was also remarkably consistent in both halves of the season. With his high rate of home runs to fly balls, his +6600 price is not a bad grab either.

Basically, what I’m getting at here is that the Indians can make adjustments to Reyes’s swing path and he could have a lot more success in the power department. He and Eloy Jimenez were the only guys in the top 20 in Barrel% with a single-digit average launch angle. Javier Baez was the only other one in the top 34.