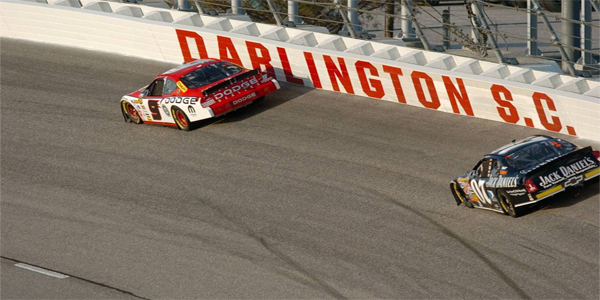 With the exception of Jacare Souza’s positive COVID-19 test, the first UFC event after the lockdown was a smashing success and a ratings bonanza. NASCAR officials are hoping for the same, sans a positive test, when they get the season restarted at Darlington Raceway in the small town of Darlington, South Carolina near the northern border of the Palmetto State.

The Darlington Raceway 400 will be the first race since March 8. NASCAR was one of the last sports to make the decision to shutdown, as all attempts were made to run the Folds of Honor QuikTrip 500 in Atlanta, but officials decided to wave the yellow flag and err on the side of caution instead.

This is going to be strange for the drivers and the teams. There won’t be any fans. Families won’t even be in attendance. Drivers will stay in their trailers until about 10-15 minutes before the race per Race Review Online. No practice. No qualifying. Just get in your car and drive.

On one hand, it’s fair to wonder if this simplified approach will help the drivers. In the past, it was all about glad-handing with the sponsors, signing autographs, meeting kids and their dads, and a whole lot of additional hoopla. Some drivers embraced their celebrity statuses better than others, but now all of the drivers are just men behind the wheel of a fast car that hope to go home to their families with some extra spending money.

On the other hand, like athletes of all sports, drivers are routine-oriented and none of this is routine. They don’t get to find the best line on the race track. They don’t get a feel for the car. They don’t get the chance to know what needs to be fixed or tweaked. They take a leap of faith getting behind the wheel that the machine is going to perform up to its capabilities. There won’t be a victory lane celebration. There won’t be an emotional meeting with the wife and kids. It is going to be a strange set of dynamics for all involved.

The hard part for us as handicappers is to try and figure out which teams might be able to benefit from this new normal. Cohesion matters more than ever. The best equipment and the best teams should be able to stand out, not to mention the best drivers, given that they will have gone 70 days between races.

So, we’ll do the best we can to break this down, as all of us venture blindly into the return of NASCAR. Odds are from 5Dimes Sportsbook for the Darlington Raceway 400.

Kyle Busch is the co-favorite alongside Chase Elliott, but you notice that we don’t see a +400 or a +450 price for the favorite like we traditionally would for a NASCAR race. Favorite prices get bumped up and the second and third-tier drivers get bumped down a bit. This is almost lined like a restrictor plate race because of the inherent uncertainty that comes along with these conditions.

Darlington goes from a once-a-year stop to a back-to-back stop for the drivers here. The Bojangles’ Southern 500 has been the only race at Darlington dating back to 2005. The Carolina Dodge Dealers 400 was last run in 2004. The only active driver to win that race at Darlington is Jimmie Johnson, who won in 2004.

The drivers will race 293 laps to cover 400.238 miles in this race. Toyota has done well here recently in the Southern 500, with wins in four of the last five and five of the last seven. Whether or not that matters going into this race is anybody’s guess, but the Joe Gibbs team had had success here on the 1.366-mile Lady in Black. The Track Too Tough to Tame has two turns of 25 degrees and two turns of 23 degrees. Drivers will be trying to find the right racing line early in the event and that could lead to some cautions with track positioning so important to figure out without practice and qualifying.

Kyle Busch has not won here since 2008. He was third and led the most laps last season and finished second back in 2017. This has sort of been a hit-or-miss track for him, which is odd given that he’s been with JGR since 2008.

Chase Elliott’s season was off to a great start. He was third in points, had three stage wins, and led the most laps at Phoenix before the season abruptly stopped. Elliott has only finished in the top five once at Darlington in five tries. Most of his better finishes have come on bigger tracks, with the exception of his Dover win in 2018 and some good runs at Richmond. I don’t know if I could take him here, though he seems to be hitting his stride in the Cup Series.

Kevin Harvick is +700 and has the pole, as the starting grid was set by owner points. Harvick was winless in four tries, but was the only driver with four top-10 finishes on the season. Harvick has finished in the top five in six of the last seven Darlington races, including back-to-back fourth-place finishes. If I had to pick one of the short prices, Harvick would be the one for me, as he does like intermediate tracks quite a bit and has had consistent results. Plus, he’ll be out front and able to determine the right groove in the track without as much resistance early in the race. Among drivers with at least 10 starts at Darlington, Harvick has the second-highest average finish behind Kyle Busch.

Denny Hamlin and Martin Truex Jr. are +750 and +770, respectively, for the Joe Gibbs team. Hamlin won at Daytona, but struggled after that. Truex never got going, finishing outside the top 10 in all four races. I don’t know if past results from this season matter at all with the 70-day layoff, but Truex hasn’t really been able to replicate his Furniture Row Racing success since flipping to JGR.

Hamlin, though, is a two-time Darlington winner and has several other top-five finishes to go along with it. He’d be the other short price on my radar this week. I’ll be skirting Joey Logano and Brad Keselowski, who both had crew chief changes prior to the season. That’s an angle I’d consider in group matchups this week. It didn’t seem to hurt Logano with two wins in the four races earlier this season, but he just happened to be in the right place at the right time in those two races.

Rather than picking a winner, it might make a lot of sense to focus on the group matchups. There are going to be some huge differences across these teams when it comes to efficiency and vision. For example, as great of a story as Matt Kenseth’s return is, if you find any matchups, look to go against him. He’ll take over the 42 car of Kyle Larson for Chip Ganassi Racing. This is Kenseth’s first time driving a Chevy and his first race with the new rules package after being a part-time driver in 2018 and a retired driver in 2019.

I would also look at drivers like Kurt Busch and Denny Hamlin in some matchups. These guys are veteran drivers that will keep it simple and have solid approaches. Other drivers might get a little bit antsy, while Busch and Hamlin will likely be more calculated.

Harvick and Hamlin are the short prices for me. I don’t want to throw a bunch of money around with so many moving parts to this race. A guy like Clint Bowyer is a good bet in his group against Matt DiBenedetto, Aric Almirola, and Ryan Newman. Look for spot plays in the group matchups because picking a winner under these never-before-seen conditions looks like a challenge.