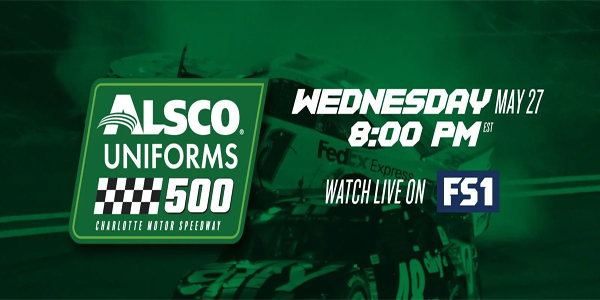 We’ve got more left turns at Charlotte coming up this week. The Alsco Uniforms 500 will be the fourth race of the post-pandemic return of the NASCAR Cup Series. Maybe “post-pandemic” is some optimistic wording, but NASCAR returned on May 17 and things have gone pretty well overall for the world’s top stock car racing circuit.

Well, unless you are Chase Elliott.

Misfortune seems to be following Elliott around this season and you could make a case that he ran into a lot of bad luck last season as well. In the Coca-Cola 600, William Byron spun out and Elliott, who was in the lead, had to pit and that was all she wrote, as Brad Keselowski took down his first win of the season. We had Keselowski in the second race at Darlington. Apparently we should have come back to him at Charlotte.

In any event, the eighth race of the season is coming up on Wednesday May 27 and won’t have qualifying or practice runs. Ironically, Byron gets the pole as NASCAR once again inverts the top 20 from the previous race to set the starting grid. That means Alex Bowman, who led the most laps and won Stage 1 and Stage 2 on Sunday, will be next to Byron in the front row.

Here are the odds from our friends at 5Dimes Sportsbook for the Alsco Uniforms 500:

Martin Truex Jr. is right back up at the top of the board despite a fairly disappointing sixth-place finish over the weekend. Truex is still seeking his first top-five finish of the season. Elliott is his co-favorite this week, as opposed to Kyle Busch, who has back-to-back top-five finishes and four in his last five races. Busch is the solid third favorite, with Bowman and Kevin Harvick rounding out the single-digit prices.

Jimmie Johnson gets some respeck on his name this week after finishing second last week. That is, until he failed the post-race inspection and was moved from second to 40th, which cost him 39 very important points.

The win for Keselowski snapped a long drought in the Coca-Cola 600 for Ford. It was the first win for Ford since Mark Martin in 2002. Realistically, it probably have should been Elliott’s and another Charlotte Motor Speedway win for Chevy and Hendrick Motorsports, but that was not to be.

Anyway, with last week in the rearview mirror, we move on to the next one. This is a 500 km race, not a 500-mile race, so we go from 405 laps on the 1.5-mile track in the longest distance in NASCAR history to just 208 laps. NASCAR has been doing shorter distances in the second race with such a rapid turnaround in hopes of protecting the drivers and the teams a little bit. These are physically, mentally, and emotionally taxing times for all involved for a variety of reasons.

The inverted top 20 makes for a really interesting field. As mentioned, Byron and Bowman start at the front, but guys like Michael McDowell, Matt DiBenedetto, Chris Buescher, and the top four rookies in John Hunter Nemechek, Cole Custer, Christopher Bell, and Tyler Reddick all start in the top 15. They will certainly be pushed quickly with the 15 through 20 spots going to Truex, Harvick, Busch, Ryan Blaney, and Keselowski.

Chevy is the starting point again here. The six top qualifying times came from Chevy and Elliott should have won the race after Bowman dominated the first two stages. Johnson was second. It was a big day for Chevy.

Elliott is the lowest-priced Chevy at +500, followed by Bowman at +780, Johnson at +1400, and then a pretty big drop-off from there. Bowman is the one I’d pick from that crop. At this point, Elliott is just snakebitten and the pressure is mounting. He hasn’t been making bad decisions, but the sense of urgency will grow with each race and this sport is tough enough as it is.

Bowman already has two wins and had the best car for the majority of the race on Sunday. He got 29 of the maximum 30 stage points when he finished second to Joey Logano for Stage 3. He eventually finished 19th, but gets to start up front and be the pacesetter in a shorter race. The +780 price isn’t great for a driver of his standing, but it speaks to how good he has been this season.

Even guys like Kurt Busch, Austin Dillon, Tyler Reddick, and William Byron ran really well last week and scored some stage points, which just speaks to how well Chevy has been performing. I’d look for Bowman to win, but also look at Chevy cars in group matchups or head-to-heads.

But, we can’t be all-Chevy in this race. Is the end of the Ford curse enough to take somebody like Ryan Blaney at +1600? Blaney’s team made some excellent adjustments to a couple of weak cars at Darlington. Blaney had some top-end speed last year and some strong finishes. I do like him a bit this week at 16/1.

If you want to take a long shot, Reddick is +5500 and he’s shown notable speed this season. He only has two top-10 finishes in his rookie season, but the car has been solid and his confidence should be growing with each passing race.

The Alsco Uniforms 500 will be on Wednesday May 27 with an 8 p.m. ET start time on FS1. We’ll be back with another preview in a couple days for Sunday’s Food City 500 at Bristol Motor Speedway.